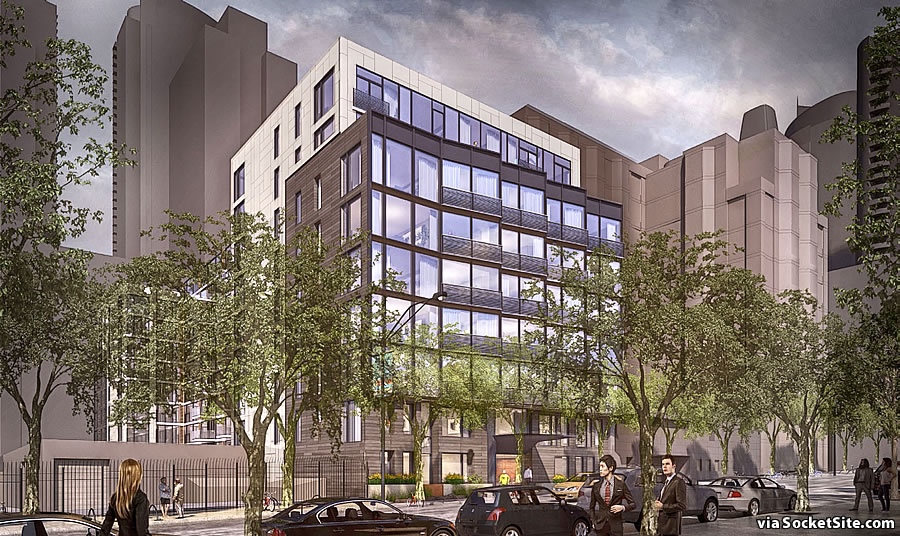 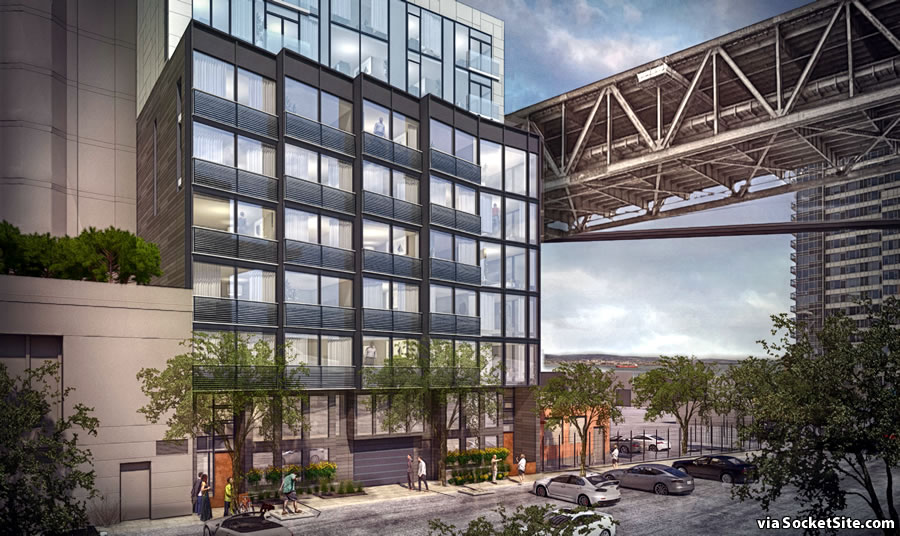 As we first reported in early March, having foreshadowed its revival back in 2015:

Approved for development back in 2009 but subsequently waylaid by a successful appeal to San Francisco’s Board of Supervisors, an appeal which was championed by neighbors in the adjacent building (Baycrest) concerned about a loss of light and views, not to mention values, for their condos and pool, the revived plans for a modern 144-unit building to rise up to 84 feet in height at 430 Main/429 Beale Street could be approved by Planning at the end of this month.

As envisioned by War Horse Cities and Tidewater Capital, the existing one and two-story storage buildings on the site would be razed in order for the nine-story development to rise.

As designed by Solomon Cordwell Buenz (SCB), the new building’s primary entrance would be at 430 Main, with the entrance to its basement garage for 72 cars, and mezzanine parking for 111 bikes, fronting Beale along with the entrances to a couple of townhomes.

And the proposed development’s northern façade [would] face the aforementioned Baycrest building’s southern units and courtyard pool and be built up to its property line, with a maximum 5-foot setback in the middle of the building above its second floor.

At the Planning Commission hearing at the end of March, the Commission sided with the stated concerns of residents and owners of the condos next door and directed San Francisco’s Department “to investigate two project alternatives that would address concerns regarding a reduction in air quality and access to sunlight by the building’s proposed massing onto the adjacent interior courtyard at 201 Harrison Street (aka Baycrest).”

The first project alternative explored the feasibility of constructing two separate towers on the site, with a gap between to “preserve Baycrest’s existing access to light and air.” But according to the project team, the resultant need for two building cores and a decrease in building efficiency, with an increase in construction costs, would require two 250-foot towers to be an equally viable development, as massed below. 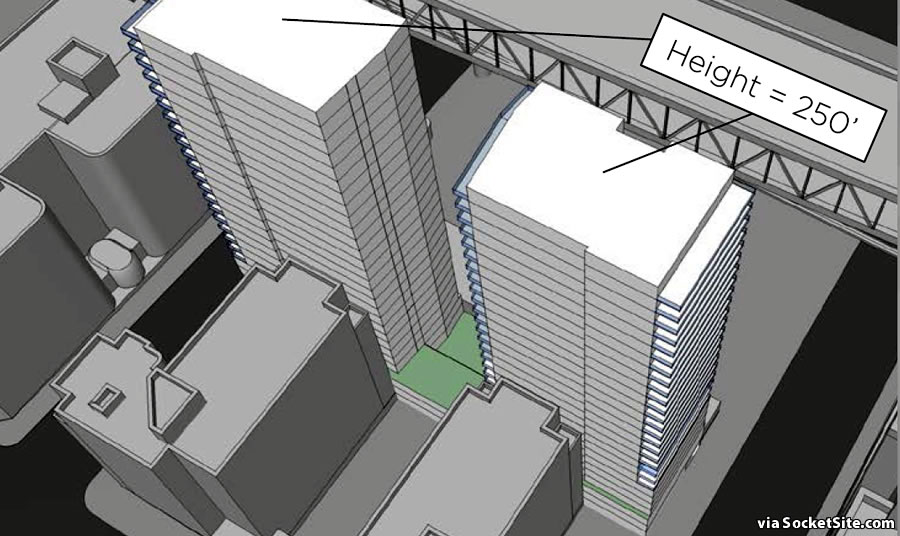 The required height increase was summarily rejected by Planning, “primarily because the basic vision for development in the Rincon Hill Area Plan includes mid-rise podium buildings of 45 to 85 feet in height that are punctuated by slender residential towers up to 560 feet that would be clustered at the crest of Rincon Hill.” And in order to increase the parcel’s height limit, “a Zoning Map Amendment would be necessary to reclassify the property from one height district to another, and requires approval by the Planning Commission and Board of Supervisors to enact an ordinance,” efforts which would likely be challenged as well.

The second alternative was based on the Commission’s suggestion of evaluating “a notch” at the upper floors of the proposed development to mitigate the neighbors’ stated objections to a loss of light and air. 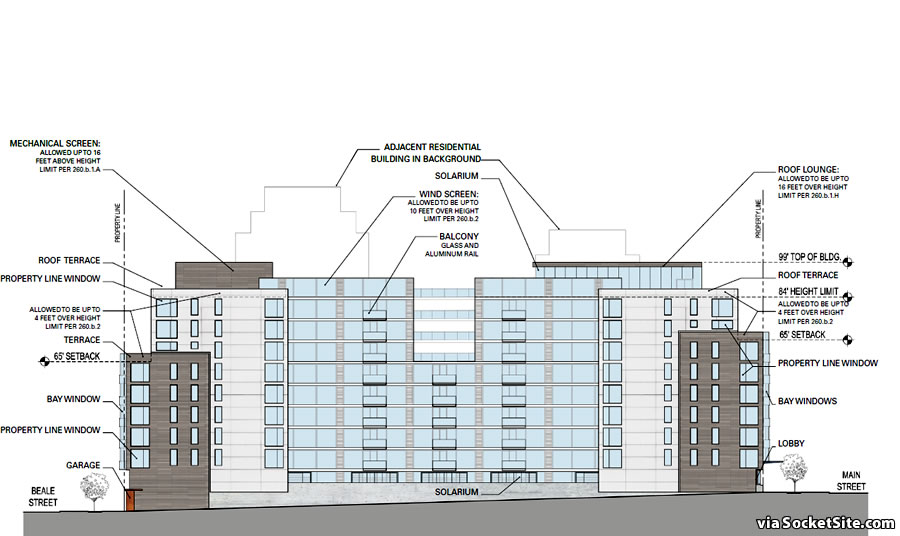 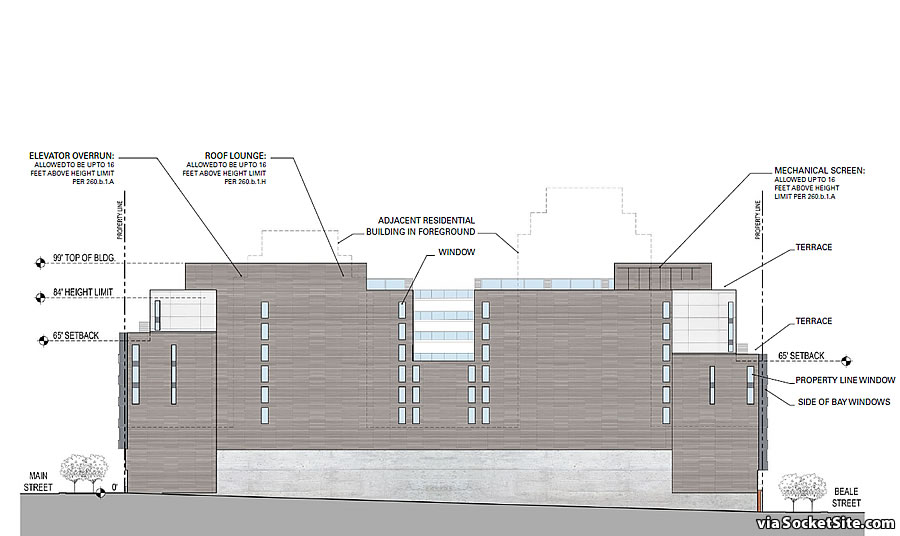 Subsequent to the hearing, the Project Sponsor proposed a design that included a glazed opening at the center of the 5th through 7th floors of the building. The Department reviewed this proposal, met with Baycrest representatives, and determined it would not effectively reduce the concerned impacts.

The Project Sponsor responded with a different proposal for a 30-feet wide open notch at the two uppermost floors, which the Department also determined would not be sufficient to reduce the air and light impacts. Staff then recommended that the design modification include a 45-feet wide notch at the center of the upper three floors that would be connected for circulation through open walkways.

The Sponsor returned with a proposal to provide a 30-feet wide open-air notch at the three uppermost floors [as newly rendered above].

Keep in mind that the “notch” would result in the loss of three (3) two-bedroom units versus as originally proposed, for a revised total of 141 units, a mix of 60 studios, 25 one-bedrooms and 56 twos.

And the rendered view from Baycrest’s courtyard as newly proposed: 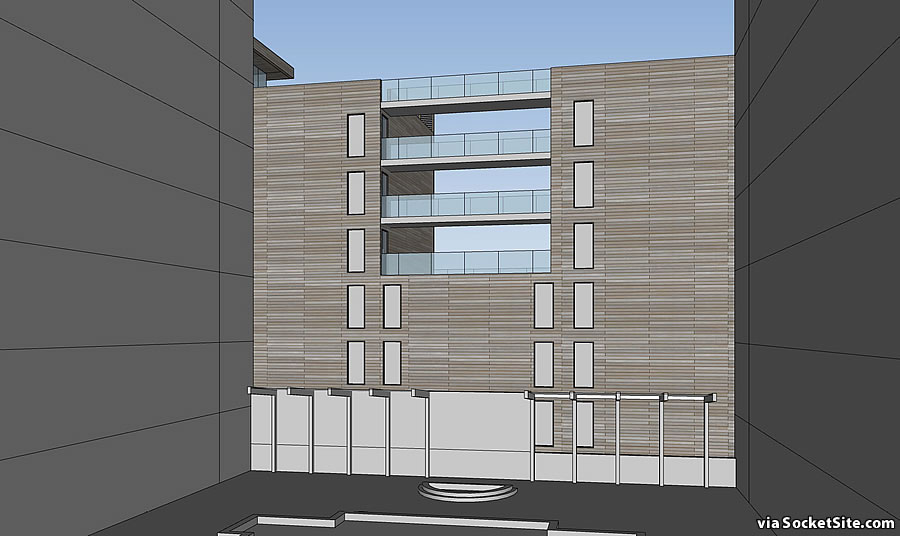 With all that in mind, the Planning Commission’s hearing for the proposed development will resume next week, with San Francisco’s Planning Department recommending the project be approved as altered, deeming the project to be “necessary, desirable, and compatible with the surrounding Rincon Hill neighborhood, and not to be detrimental to persons or adjacent properties in the vicinity.”