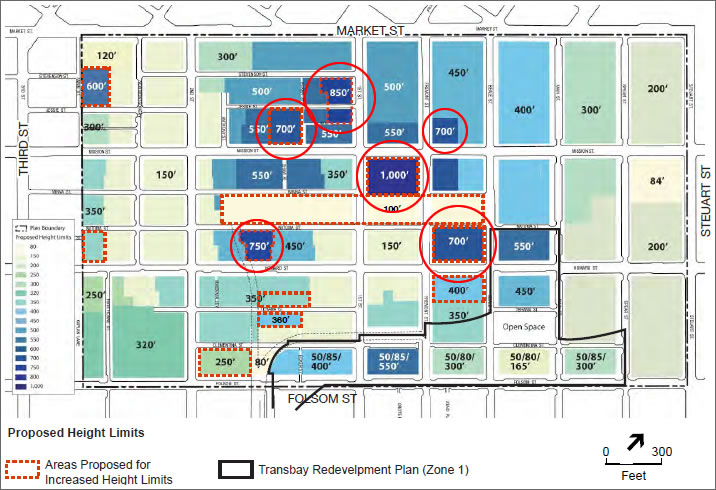 As plugged-in people know, San Francisco’s Transit Center District Plan would permit up to six new buildings with heights ranging from 700 to 1,000 feet to rise within the area generally bounded by Market, Steuart, Folsom and a line east of Third.

At the center of the District, the roof of the proposed 61-story Transbay Transit Tower would rise to a height of 920 feet, topped by a 150 foot “lattice-like steel sculptural element” for a total height of 1,070 feet under which 1.35 million square feet of office space, 20,000 square feet of retail, and parking for 300 vehicles would be constructed.

As part of the plan, bicycle lanes would be striped on Fremont, Beale, and Main Streets and the sidewalk along Mission Street will be widened from 15 to 19 feet for the most part.

Any moment now, San Francisco’s Planning Commission is set to review and vote on the proposed Plan, Planning’s approval of which would send the Transit Center District Plan to San Francisco’s Board of Supervisors for adoption, net new shadows and all. 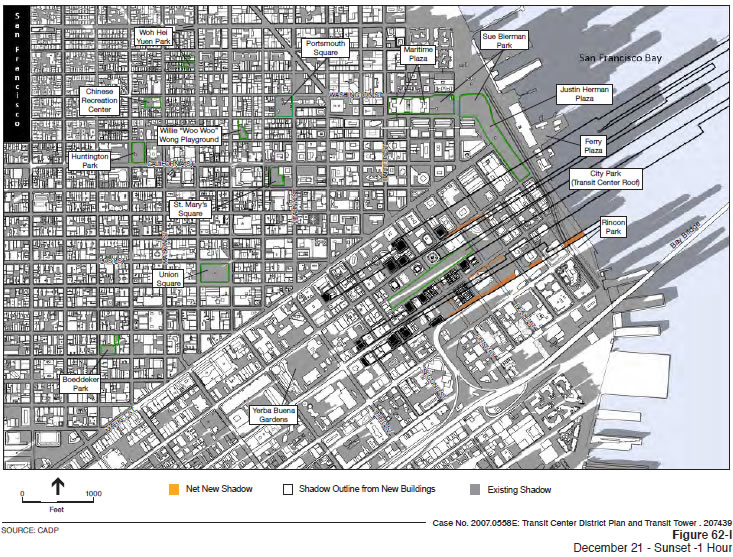 UPDATE: The Transit Center District Plan was approved by the Planning Commission. From the Planning Department:

The new district will feature more than six million square feet of new office space, over 4,000 new housing units of which at least 1,200 units will be affordable, up to 1,000 new hotel rooms, and improved streets to enhance transit service and support walking and bicycling. The new Plan also proposes to create and fund over 11 acres of new public spaces such as parks, plazas and living streets.

The Department projects the Plan will raise $590 million in revenue from development.