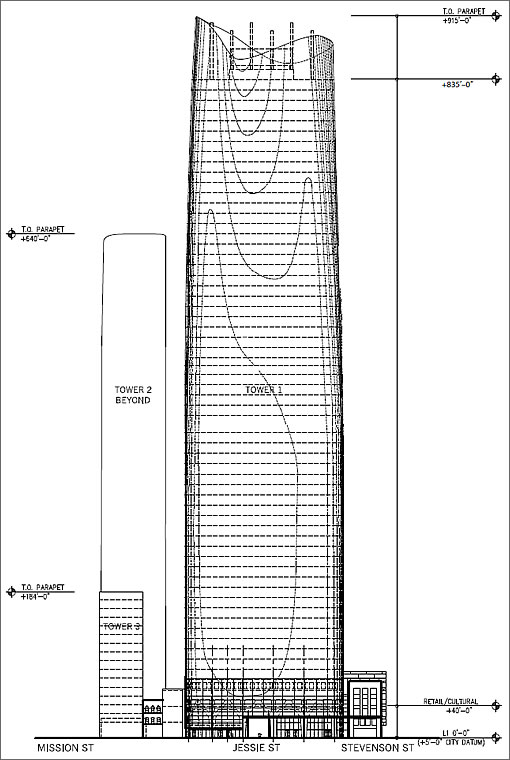 While the designs for a cluster of Renzo Piano-designed ultra-thin towers at the corner of First and Mission may have fallen by the wayside, plans for building upon the seven parcels a.k.a. 50 First have not as Marcus Heights, LLC, proposes to demolish four existing structures and develop three SOM designed towers ranging in height from 184 to 915 feet with solar/wind energy collection features atop. 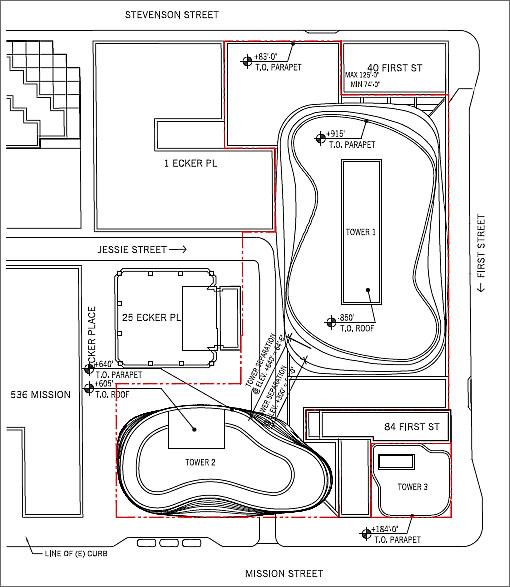 Tower One would front on First Street and would span the portion of Jessie Street that runs through the project site. The 64‐story building would be 850 feet tall to the roof (915 feet tall to the top of the parapet and solar/wind energy collection features), and would include an 83‐foot tall base that would also have frontage on Stevenson Street, where the proposed performance theater would be located. The building would contain approximately 43,000 square feet of retail and the 15,000 sf performance theater on levels one through three. Mechanical space would occupy the topmost story. The remaining 60 stories would provide approximately 1.25 million square feet of office space. The tower would span the easternmost portion of Jessie Street, which would be closed to vehicular traffic and converted into a 20‐foot‐tall public pedestrian passageway (Jessie Street Galleria) flanked by retail space and lobbies serving the office use. The First Street frontage, moving from north to south, would include the theater entrance, office lobby, entrance to the Jessie Street Galleria, second office lobby and a retail store. The Stevenson Street frontage would include retail space and a garage/loading dock driveway separated by an open pedestrian entry to the interior passageway linking Stevenson Street, Mission Street and First Street via the proposed Jessie Street Galleria. An approximately 5,100‐square‐foot publicly accessible roof terrace would be developed atop the 83‐foot tall theater, fronting on Stevenson Street.

Tower Two would front Mission Street and Ecker Place. The 56-story building (605 feet to the roof, 640 feet to the top of the parapet) would include residential and hotel uses above the ground-floor entrances and two levels of hotel service space. Approximately 266 hotel rooms would be located on floors four through 22 and approximately 160 residential units would occupy levels 23 through 55. A mechanical level would occupy floor 56. The ground floor would include a hotel entrance, a residential lobby on Ecker Place, and a retail space at the corner of Mission and Ecker. The hotel lobby would be on the second floor, and hotel function space would occupy level 3. Publicly accessible open space would occupy the set back area between Tower Two and the Mission Street and Ecker Place property lines. 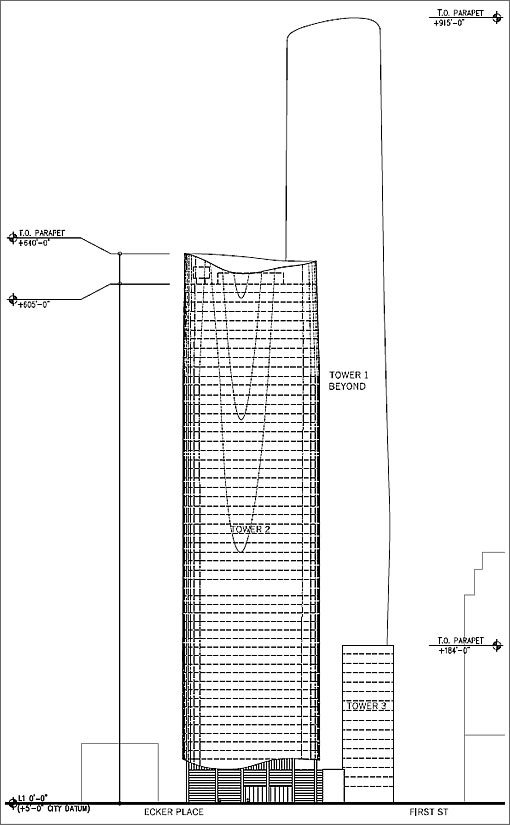 Tower Three would be located at the northwest corner of Mission and First Streets. This 15-story, 174-foot tall building (184 feet tall to the top of the parapet), would include retail space and a residential lobby on the ground floor and 22 residential units on the upper levels. Tower Three would be separated from the rest of the proposed project by a “T” shaped parcel (84 First Street) that is not under the control of the project sponsor and not included in the project site.

The project as proposed would either require approval of the proposed Transit Center District Plan and accompanying rezoning with respect to increased height limits or a site-specific amendment of the Planning Code and General Plan height maps by way of the Board of Supervisors upon recommendation from the Planning Commission.

Next step, the preparation of an Environmental Impact Report (EIR).

The Inside Scoop With Respect To 1844 Market’s Foreclosure Filing