Office Vacancy Rate in S.F. Was Holding at a Pandemic High 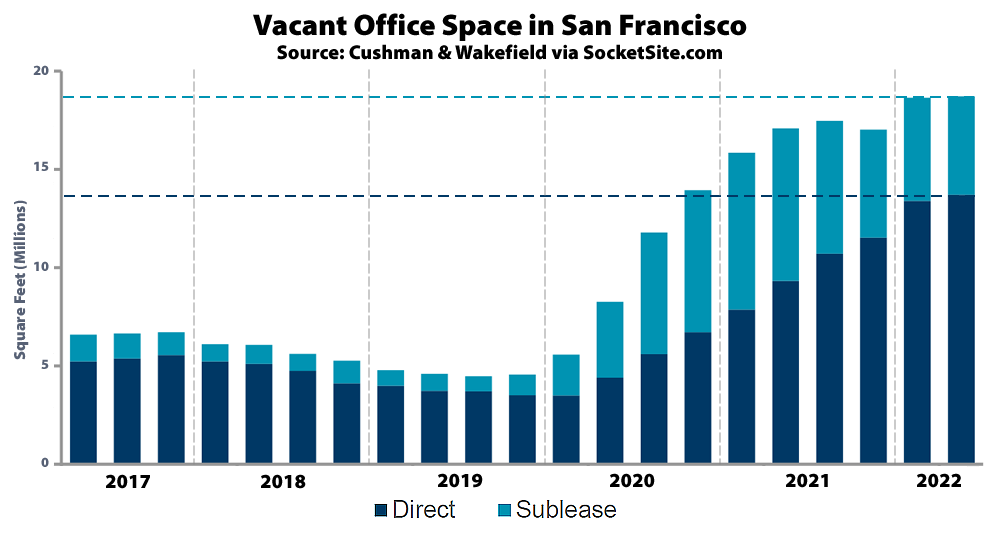 Having hit a pandemic high of 21.7 percent in the first quarter of 2022, the effective office vacancy rate in San Francisco was unchanged in the second quarter of this year, representing 18.7 million square feet of vacant office space in the city, with a slight decrease in the amount of space which is technically leased but sitting vacant and being offered as a sublet (which inched down from 5.3 million to 5.0 million square feet) having been offset by an increase in the amount of un-leased space, which increased from 13.4 million to 13.7 million square feet, according to data from Cushman & Wakefield.

And once again, as we outlined at the end of last year:

“Despite the drop in the overall vacancy rate at the end of 2021, the amount of un-leased office space in San Francisco actually ticked up, both in the absolute and relatively, with 1.3 million square feet of space that was being offered for sublet in the third quarter having been leased, reoccupied or returned to the market as directly vacant space. And total leasing activity actually dropped from the third to fourth quarter of last year, with “a scarcity of large transactions,” a push back of return to office dates (yes, the surge in COVID cases is meaningful, beyond increasing hospitalizations and deaths), and under 1 million square feet of space having been leased, including sublets, for a negative net absorption.”

Purchase Activity for New Homes Drops Despite (Much) More Inventory

Specter of an Even Bigger Rate Hike Looms