Office Vacancy Rate in San Francisco Inches Down, But… 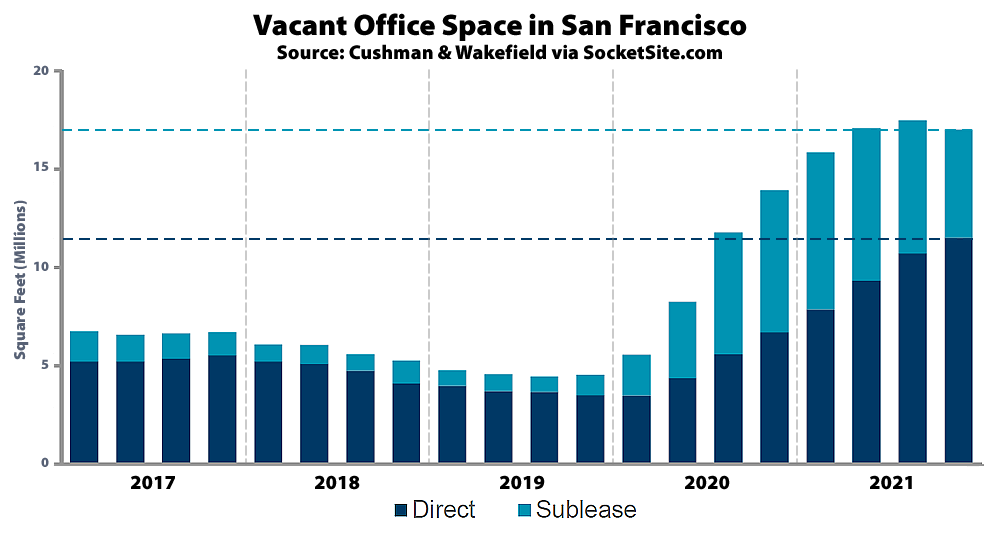 As a point of comparison, the office vacancy rate in San Francisco was 16.7 percent at the end of 2020 and 5.7 percent, with under 5 million square feet of vacant space, at the end of 2019.

Despite the drop in the overall vacancy rate at the end of 2021, the amount of un-leased office space in San Francisco actually ticked up, both in the absolute and relatively, with 1.3 million square feet of space that was being offered for sublet in the third quarter having been leased, reoccupied or returned to the market as directly vacant space. And total leasing activity actually dropped from the third to fourth quarter of last year, with “a scarcity of large transactions,” a push back of return to office dates (yes, the surge in COVID cases is meaningful, beyond increasing hospitalizations and deaths), and under 1 million square feet of space having been leased, including sublets, for a negative net absorption.

And while the average asking rent for office space in San Francisco inched up 0.8 percent from the third quarter ($73.46 per square foot) to the fourth quarter of last year ($74.06), it’s still down nearly 12 percent from a peak of $83.83 in mid-2020 and the increase in the direct vacancy rate is expected to put pressure on landlords to reduce asking rents over the next few quarters if not year(s).

Rebuilt, Reduced, In Contract and Under Investigation