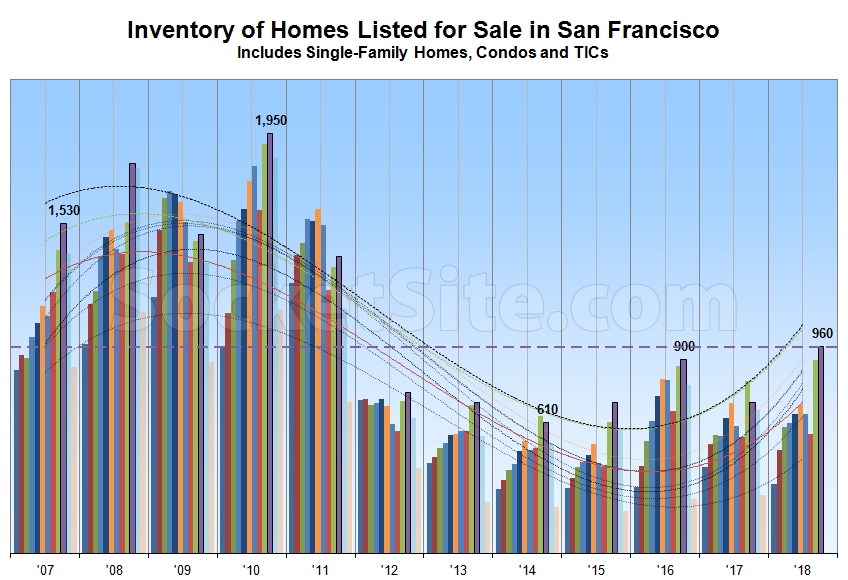 It would appear we called the “top” too soon, at least with respect to the number of homes listed for sale in the San Francisco. And having hit a 7-year high in September, the inventory of homes on the market in San Francisco has ticked up another 6.7 percent to 960 and total inventory is now running 31 percent higher on a year-over-year basis and 36 percent above its mark at the same time in 2015 (705), the year which remains an inflection point for the current cycle.

At a more granular level, the number of single-family homes currently listed for sale in the city (360) is now running 49 percent higher versus the same time last year while the number of listed condominiums (600) is up 22 percent, not including the vast majority of new construction condos for sale across the city.

At the same time, 23 percent of the active listings in San Francisco have undergone at least one price reduction, which is roughly even with the same time last year, and the number of homes on the market listed for under a million dollars (330) is the most since 2016.

As we wrote two weeks ago, inventory levels have likely peaked for the year and should start to decline though the end of December while the percentage of listings with a price cut, which ticked up another point over the past two weeks, should continue to increase.

And once again, keep in mind that recorded home sales in San Francisco were 5.9 percent lower on a year-over-year basis in August having dropped to a seven-year seasonal low in July and pending sales remain down.