Postcard Row On The Courthouse Steps 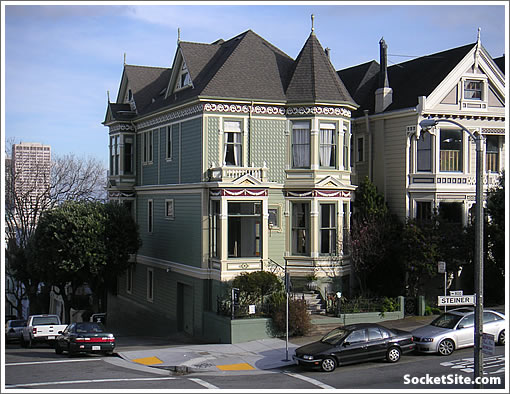 As we wrote about the San Francisco Postcard Row home at 722 Steiner in 2010:

Once again, Matthew Kavanaugh developed the 700 block of Steiner Street between 1892 and 1896, now known as San Francisco’s Postcard Row. Originally the developer’s own home, 722 Steiner at Grove was slated for demolition in the 1970’s but survived and was restored.

In default since early 2011 on a $1,740,000 first mortgage from 2007 (hence the “Seller MUST sell, will consider all offers” note in 2010, a sale which never occured), 722 Steiner is once again scheduled to hit the courthouse steps tomorrow with $2,046,876 now owed on that first alone. A courthouse sale would wipe out a $290,000 second as well.
∙ “Seller MUST Sell” 722 Steiner [SocketSite]
∙ Postcard Row’s Postman’s Home Hits The Market (722 Steiner) [SocketSite]
∙ 722 Steiner: Reduced Again (By Postage For 750,000 Postcards) [SocketSite]
∙ Somebody Get Gekko On The Phone… [SocketSite]
∙ While A Big One Sells, Another Is Scheduled For The Steps [SocketSite]

Lurking Behind This Larkin Street Penthouse Wall: The Office