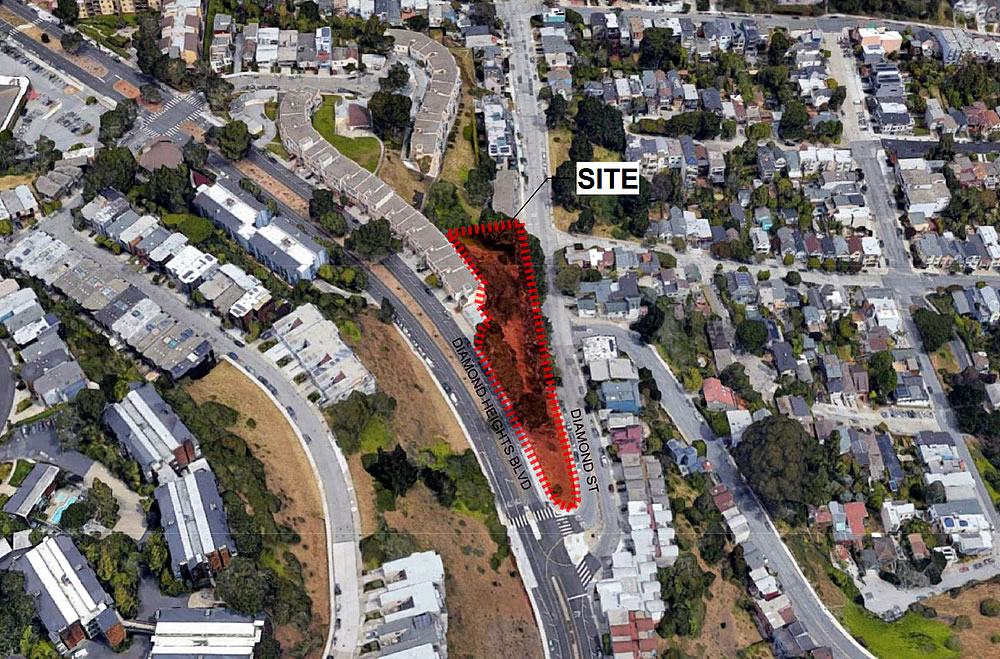 As we first outlined earlier this year, plans for a 24-unit, market-rate development to rise along Diamond Street, between the intersection of Diamond Heights Boulevard and 29th Street, overlooking Noe Valley, have been drawn.

And as drafted by Solomon Cordwell Buenz (SCB) for the Emerald Fund, the development as envisioned would rise up to 40 feet in height, with four (4) four-bedroom single-family homes averaging around 3,400 square feet apiece bookending the development and twenty (20) three-bedroom townhomes averaging closer to 1,950 square feet between, and a total of 29 off-street parking spaces, with two parking spaces for each of the single-family homes. 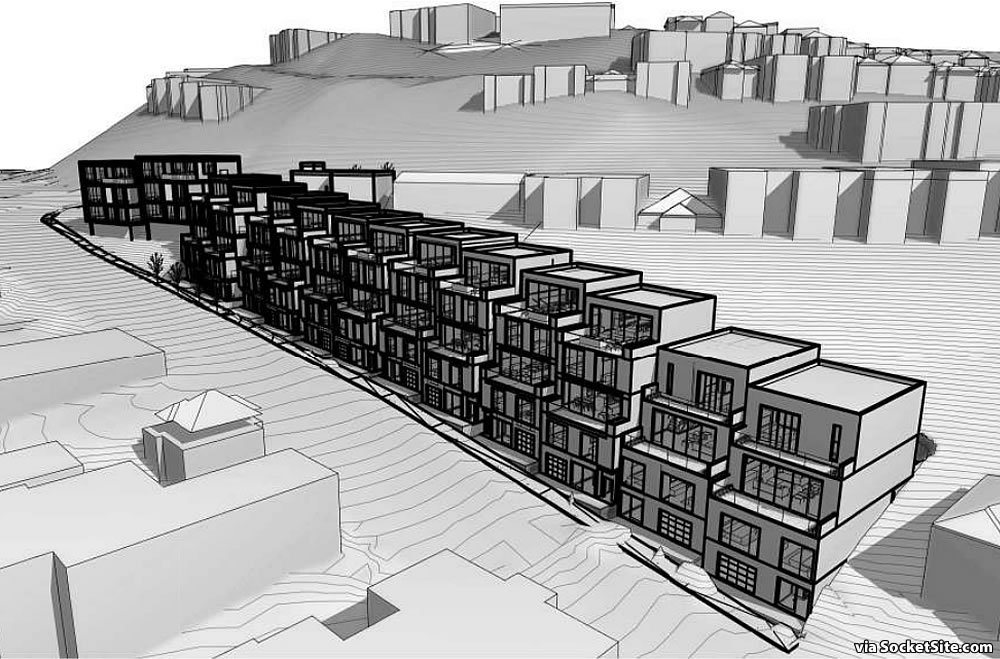 But based on Planning’s preliminary review of the draft plans, they’d like to see even more density on the site.

As noted by Planning: “The project proposes to add 52,480 residential square feet resulting in 24 units per lot, just short of the 25-unit threshold that would trigger the Inclusionary Housing Program (Planning Code Section 415), which requires payment of the Inclusionary Affordable Housing Fee or a percent of units to be provided as Below Market Rate (BMR) units on-site or off-site.” And based on Planning’s preliminary review of the draft plans and data, “the Department estimates that roughly 43 units could be reasonably provided on the site under the base zoning.”

As such, the department is requesting that the team explore “all available options that [would] maximize residential development on the site in a manner that meets all other applicable requirements and standards, including available density bonus programs” and “strongly encouraging” the team to increase the density of the proposed project prior to submitting a formal application to proceed.

Also noted, as the intent of a required Planned Unit Development authorization is to yield “one development site that produces an environment of stable and desirable character which will benefit the occupants, the neighborhood and the City as a whole,” the proposed subdivision of the site “is not supported [as proposed].”

UPDATE (6/16): As correctly noted by a number of plugged-in readers below, while there is a marked increase in the inclusionary housing requirements for a development with 25 units or more, developments which would yield 10 to 24 units, such as the project as proposed, are subject to inclusionary housing contributions as well (albeit at a lower rate).

And while we have a feeling that Planning’s original feedback to the development team, as quoted above, was intended to highlight the “just short of the 25-unit threshold” nature of the project as proposed, Planning’s PPA letter has since been revised to remove said commentary at the request of the project team.