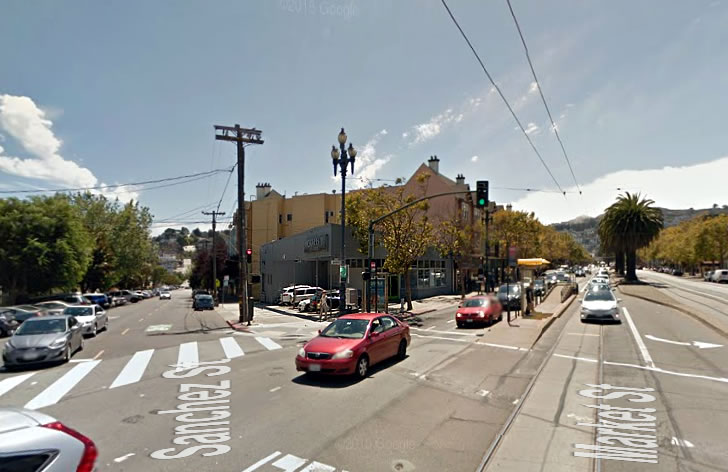 The Duboce Triangle Neighborhood Association (DTNA) has challenged the plans for the proposed six-story building to rise at 2201 Market Street, at the intersection of Sanchez, a development which would yield 14 market rate condos over a ground floor commercial space and an underground garage, accessed via an elevator, for six cars. 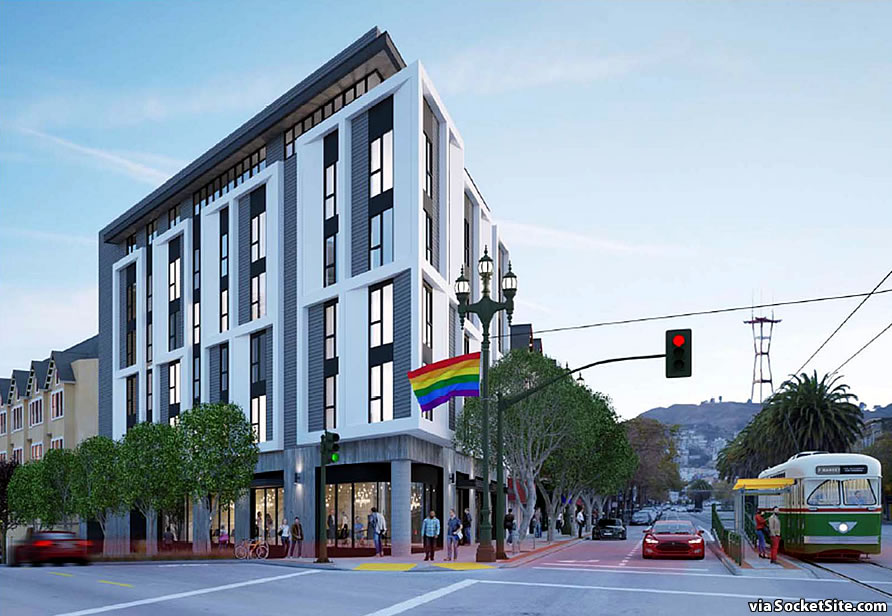 The four issues raised by the DTNA in their request for a Discretionary Review (DR):

Issue #1: The DR Requestor is concerned the design of the ground floor at Market and Sanchez Streets could potentially become an area that would attract transients seeking covered shelter, and requests that the corner be fully enclosed without the proposed column element.

Issue #2: The DR Requestor is concerned the Project would not provide on-site inclusionary units but instead satisfies this requirement through the payment of in-lieu fees, and proposes the Project be required to provide the two affordable units on-site.

Issue #3: The DR Requestor is concerned about the visibility of the two proposed stair penthouses and requests that they be incorporated into the envelope of the building through roof hatches or waterproofed exterior stairwells.

Issue #4: The DR Requestor is concerned with the desirability of the proposed single storefront at the ground floor and would like the commercial space to be divided into at least two separate units.

Issue #1 Response: The design of the Project has been thoroughly vetted with Planning Department staff and undergone extensive review by the department Urban Design Advisory Team. Based on comments received, the corner column element was exposed to create interest along the streetscape and to mirror similar exposed elements within the Upper Market Neighborhood. The exposed column reduces the bulk and massing of the ground floor and is an interesting design feature of the Project. As the Project will be including ground floor retail, it will be active with pedestrians visiting the store as well as with residents of the units above walking along the street front and in this area thereby reducing the likelihood of transient occupation of the space created. The Project has proposed a high-quality design, including an aesthetically pleasing and active ground floor and enclosing the column element is not warranted as it will create dead space within the ground floor that is unlikely to be active given its limited dimensions.

Issue #2 Response: The original plans for 2201 Market Street that were submitted two years ago included nine large family sized units, given the site constraints of the parcel. However, the Sponsor was strongly encouraged to increase the unit count in order to provide below market rate (BMR) units. In response to this request, the Project is proposing fourteen units. While the intent was to provide on-site inclusionary units, as noted by the Planning Commission during their discussion of the 2600 Harrison Street project on August 11, 2016, providing on-site affordable units on small projects is not financially feasible. This became evident as the Project moved forward with construction level drawings, began obtaining estimates for construction costs, and began to seek financing. Based on this additional information it was determined that it is financially infeasible to provide on-site BMR units. Unlike large projects, small projects lack the economies of scale to distribute the cost of these affordable units across market rate units, which is why most small projects elect to pay the in-lieu fee. To require the Project to provide onsite affordable housing would render the Project infeasible.

Issue #3 Response: The Project is required to provide two stair egresses and an elevator to the roof for life safety requirements. Because the roof is an exposed area subject to inclement weather, all three egress points are enclosed. The design of the enclosures has been minimized and meets the minimum dimensions required under the Planning, Building and Fire Code. Contrary to the request in the DR, a roof hatch is not feasible or permitted under current code. An exposed exterior stairwell is possible but creates unique and unnecessary maintenance issues because of potential water intrusion when all new construction is carefully designed and built to minimize areas that can be exposed to water. Water intrusion is very expensive to repair and can cause structural damage to buildings. The Project’s location at the corner of an exposed area adjacent to a wide street has the potential to be exposed to significant weather events.

For these reasons, exposed stairwells, while permitted, are not proposed nor are they standard because of the ongoing maintenance and large liability potential.

Issue #4 Response: The Project proposes one retail space at the ground floor because of the unique dimensions and constraints of the small triangular shaped lot that also slopes along both Market Street and back to Sanchez Street. Dividing the ground floor retail into two spaces will require extensive additional modifications to the building to allow separate entries, back of house facilities and utilities for each space. Providing these separate features reduces the size of the retail spaces provided as well as significantly increasing the cost of construction. During the design review process, the Sponsor has agreed to design and construct the ground floor in a manner that could potentially accommodate two retail spaces. The Sponsor has agreed to this as part of the Project for many months, but cannot agree to show the ground floor as two separate retail spaces. This not only precludes the potential for one large tenant to occupy the space, but would impose an unfair and inordinate burden on the Project Sponsor that has not been imposed on other similar surrounding developments. There is nothing extraordinary or exceptional related to the ground floor retail in this location that warrants two retail spaces as opposed to one.

And the Planning Department’s recommendation to the Planning Commission which will hear the case next week: Approve the project as proposed. 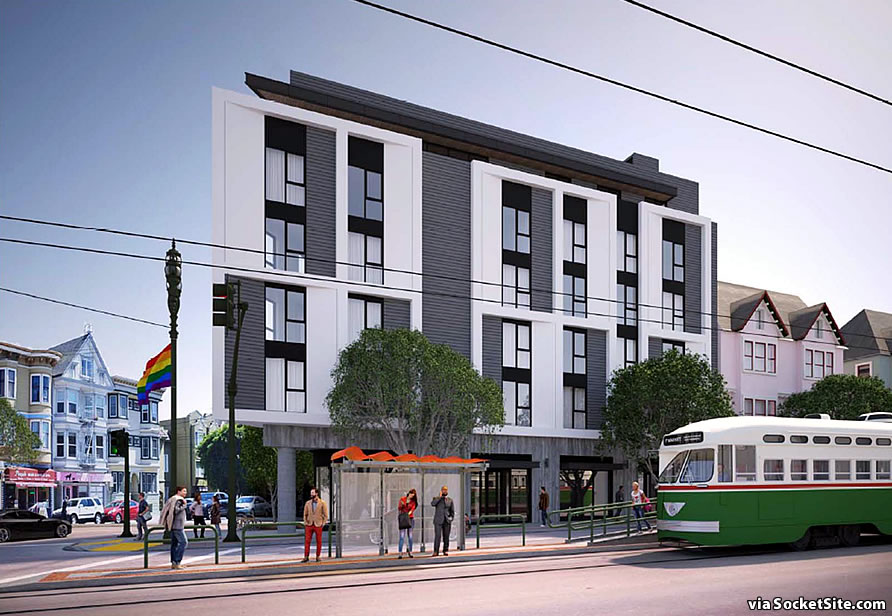 The paperwork to secure the demolition and building permits for the 2201 Market Street project have already been filed. And if approved, the project could be completed within 14 months of breaking ground.

Concept redevelopment plans for the Market Street parcel have been in the works since 2013 following Starbucks’ failed bid to renovate and occupy the existing retail space on the corner.

Plans for Another Sizeable Union Square Hotel and Less Parking

184 Murphy Beds and Toilet Sinks in the Mission as Proposed