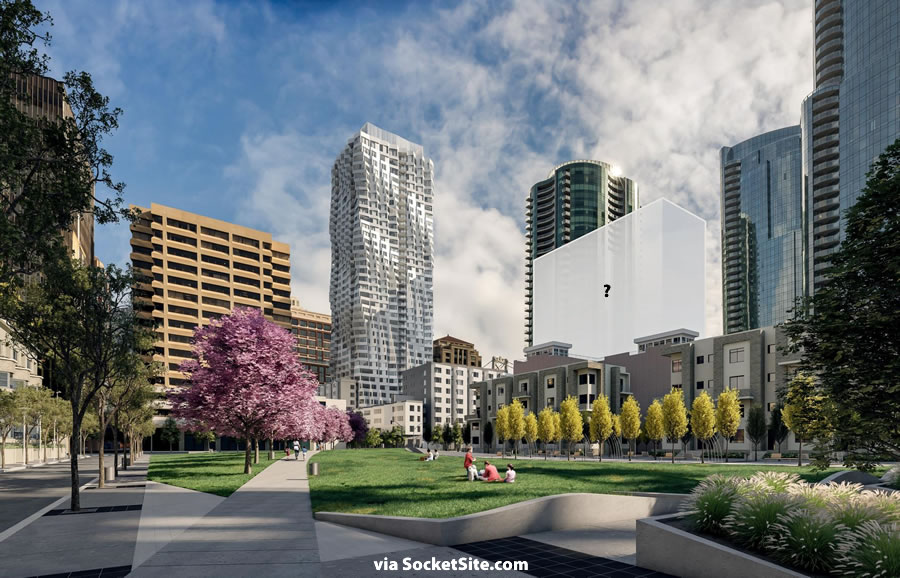 A plugged-in tipster delivers the latest rendering for San Francisco’s future Transbay Park, the construction of which is currently slated to commence in early 2018 (once the operations of the Temporary Transbay Terminal move to San Francisco’s new Transbay Transit Center and free up the blocks bounded by Folsom, Main, Howard and Beale).

While rendered with a full 400-foot Bay Tower tower at the corner Folsom and Spear in the background, the required up-zoning for which is gaining momentum, the shadowed massing for a 165-foot-tall building at the corner of Folsom and Main might catch some by surprise.

San Francisco’s Downtown Area Plan doesn’t currently note the intended upzoning of the Block 2 corner from 85 to 165 feet, but it was outlined in the adopted Transbay Redevelopment Plan.

And in addition to formally amending the Area Plan to allow for the 400-foot tower at 160 Folsom, an ordinance working its way up to San Francisco’s full Board of Supervisors would solidify the 165-foot height limit for the corner parcel at Folsom and Main.

Here's the Deal with This Little Guy