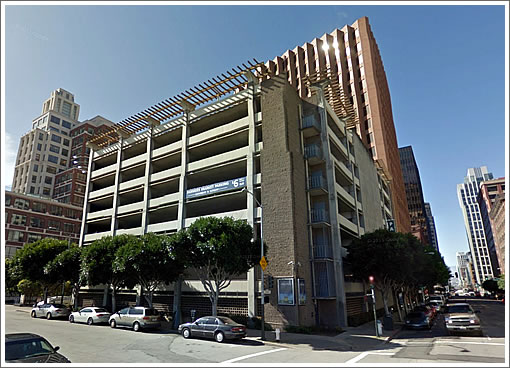 As we wrote a year ago, an application had been filed to raze the eight-story and 550 space parking garage at 75 Howard Street and build a 284-foot building with 160 condos.

We now have the details and design for the proposed tower, the height of which has risen to 350 feet and 31 stories with 186 condos over a ground floor restaurant, café, and 175 underground parking spaces accessed from Howard Street.

The project also includes landscaping and paving improvements, resulting in a new 4,780 squre foot landscaped and publicly accessible open space in the triangle at the end of the block. Steuart Street south of Howard would be narrowed and on-street parking would be eliminated along with the turnaround bulb at the southern terminus of the street.

The 7-story (82-foot-tall) horizontal podium element would be built to its Howard Street (north) and Steuart Street (east) property lines, and it would be set back from the south property line by about 18 feet and from the west property line by about 3 feet. The podium element would measure about 153 feet from east to west and 116 feet from north to south. The ground and second stories would be recessed about one to six feet from the wall plane of the podium above, forming a high, continuous band of glazing at the ground floor and second floor across a portion of the north façade, all of the east façade, and part of the south façade. These setbacks are intended to define a transparent, pedestrian-oriented ground and second floor, with a horizontal podium volume above, provide additional sidewalk space along Howard Street and Steuart Street, and provide additional space for the café garden and common open space along the south façade.

The building would likely be clad in glass and stone (granite or limestone), ranging from light to medium grey. Two variants for the proposed tower are also on the boards, a Public Parking Variant and a proposed Residential / Hotel Mixed Use Variant.

The proposed Public Parking Variant would provide an additional 96 non-accessory public off-street parking spaces, for a total of 271 parking spaces, to partially offset the 550 public spaces lost by demolition of the 75 Howard Garage. All 271 parking spaces would be located in stacked mechanical spaces on Basement Level 2 within the proposed 26,701-gsf parking garage.

UPDATE: As a plugged-in reader quickly notes, the 75 Howard site is currently zoned for up to 200 feet and implementation of the proposed project would require the adoption of legislative amendments to reclassify the height limit to 350 feet.

A Kynar, Gentler Eleven-Story Hotel Proposed To Rise On Fourth