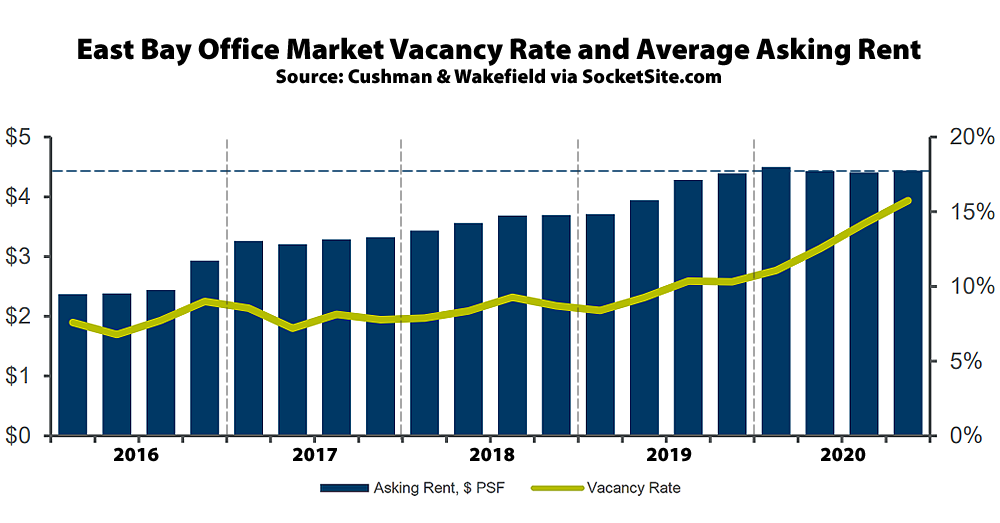 With the office vacancy rate in San Francisco having ticked up to 16.7 percent, the vacancy rate for office space in the East Bay is now nearing 16 percent as well, with 4 million square feet of un-leased space and over a million square feet of space which has been leased but is sitting vacant and seeking a subletter, according to Cushman & Wakefield.

And while the average asking rent across the East Bay market inched up a few pennies at the end of the year to $4.44 per square foot per month, which was up from $4.42 per square foot at the end of the third quarter and versus $4.39 at the same time last year, rents in Oakland’s Central Business District actually slipped 3.9 percent last year, asking rents “continue to be propped up by several blocks of sublease space with top-of-the-market pricing,” which includes 134,000 square feet of Square’s space at Uptown Station which they’re seeking to sublet with an asking rent of $6.25 per Square foot, and “rents are expected to decline as adjustments typically take several quarters to respond,” following in the footsteps of the market in San Francisco.