Office Vacancy Rate in Oakland Ticks Up, But… 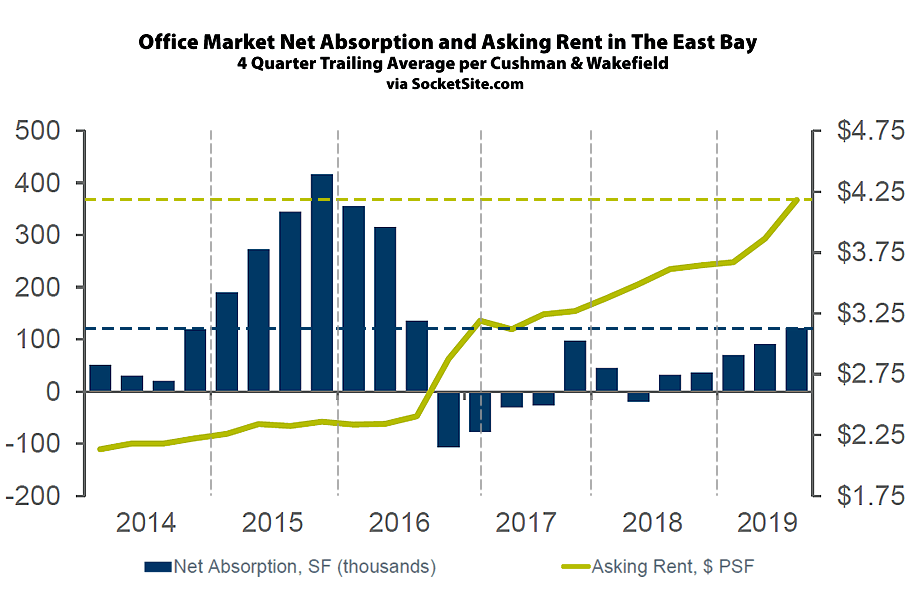 The vacancy rate for East Bay office space around Oakland has ticked up from 9.5 percent at the beginning of the year to 11.9 percent today, driven by the delivery of 600,000 square feet of new space at 601 City Center in Downtown Oakland, half of which was pre-leased to Blue Shield while the other half remains vacant, according to Cushman & Wakefield.

That being said, while down from 201,000 square feet of positive net absorption in the second quarter of 2019, which was driven by Square’s pre-leasing of Uptown Station, the net absorption of office space sill totaled a positive 60,000 square feet in the third quarter of the year, and the average asking rent for office space in the East Bay has ticked up to a record $4.18 per square foot per month, which is up nearly 16 percent on a year-over-year basis, with asking rents near Lake Merritt, the most expensive submarket, holding at around $5.12 per foot.

And having hit a lull last year, the cumulative need of tenants currently looking for office space around Oakland has since nearly doubled to 2.3 million square feet, driven in part by San Francisco tenants looking to expand or relocate to a less expensive market.

At around $59.50 per square foot per year, asking rents in Oakland’s CBD are still 26 percent cheaper than in San Francisco, which down from 50 percent cheaper at the end of 2014 (when we outlined why Oakland was at a tipping point with respect to demand and growth).