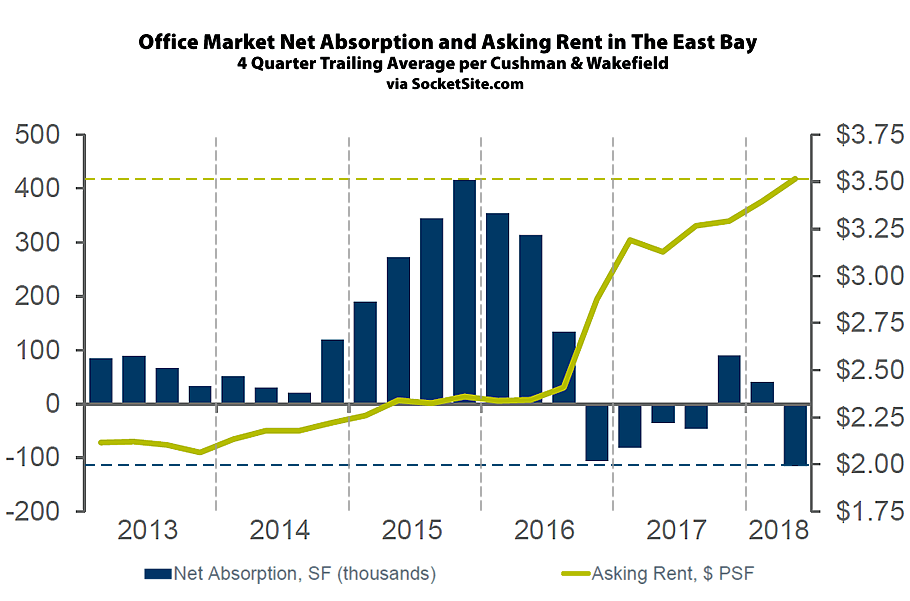 While still below average, the vacancy rate for East Bay office space has ticked up from 8.2 percent at the beginning of the year to over 9 percent today, including an uptick in the vacancy rate for existing office space in Oakland’s Central Business District (from 6.6 percent to 7.8 percent over the past six months, corresponding to 142,000 square feet of net negative absorption), according to Cushman & Wakefield.

And as we foretold back in 2016, the known and active demand for office space in the East Bay has dropped from 1.9 million square feet in 2015 to around 1.2 million square feet today, roughly 7 percent of which consists of existing San Francisco tenants looking to expand or relocate versus nearly 30 percent three years ago.

All that being said, the average asking rent for office space in the East Bay has still ticked up to a record $3.51 per square foot per month, up 8 percent over the past year, with asking rents near Lake Merritt, the most expensive submarket, now running around $4.46 per foot (which is actually down 3 cents over the past twelve months).

At around $53.50 per square foot per year, asking rents in Oakland’s CBD are now 26 percent cheaper than in San Francisco, down from 50 percent cheaper at the end of 2014 (when we outlined why Oakland was at a tipping point with respect to demand and growth).

New Plans for a Transbay District Tower Have Been Drafted