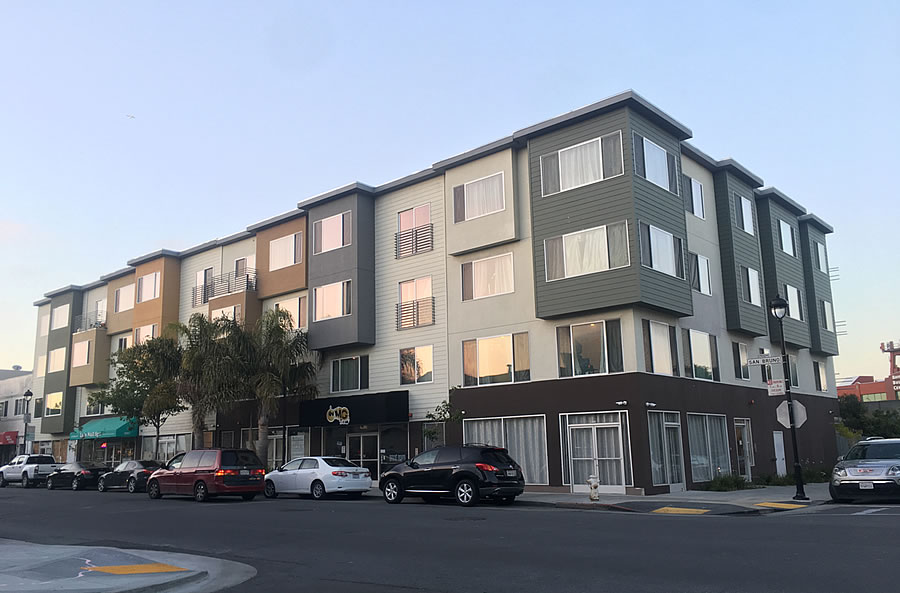 Six years ago, the plans for the four-story infill development at 2867-2899 San Bruno Avenue in Portola were drawn, approved and subsequently constructed.

Technically five separate buildings, with 10 residential units over 10 “non-residential” office units and 5 ground floor commercial spaces as designed in order to conform to San Francisco’s Planning and Building Codes, one (1) of the “10” residential units was to be offered at below market rates (BMR).

But with the development nearly completed back in 2017, the property owner (Nelson Tong) and architect (Jeremy Schaub of Schaub Ly Architects) requested that a payment be accepted in-lieu of providing the BMR unit. From said request which was never formally heard nor approved:

Keep in mind that the plans for the “office units” were conveniently “designed in a manner that could lend to post inspection residential conversions,” as noted by a plugged-in reader back in 2012.

And with it since being discovered that the “office units” across the second floor of the development were, in fact, converted into 10 unpermitted residential units, and that the 10 permitted residential units across the third and fourth floors of the development were actually converted into 20 smaller units, there are now an additional 20 unpermitted units on the site, for a total of 30, none of which have been offered at below market rates.

A site inspection has also revealed that “the existing exterior facade and architectural design features of the subject buildings are not consistent” with the plans which were actually approved and the garages in each of the five (5) buildings were either altered or removed while the driveway and landscape area on the rear portion of the lots was converted into unauthorized parking spaces.

Having been hit with a Notice of Violation from San Francisco’s Fire Department earlier this year, temporary scaffolding has since been hastily erected behind the building to serve as fire escapes from the unpermitted – but “what’s wrong with more housing” – units.

UPDATE: The owner of the building is now seeking to have the 10 “office” units legalized as “accessory dwelling units” (which will require a rezoning of the five parcels to accommodate the additional density) and permits to remove 5 of the 10 unauthorized units above (“for which there is no path to legalization”).  At the same time, the check to secure the permit for said plans, which include the installation of permanent fire escapes, has bounced.