With the proposed redevelopment of the Elbo Room – which now calls adding three new stories atop the existing two-story building at 645-647 Valencia Street, converting its ground floor into a 600-square-foot retail space and 4-car garage, and constructing seven apartments above – having been granted a streamlined environmental review and the building permits for the project in the works, the owners of the 3-unit building behind the bar on Sycamore and Lexington have filed a formal challenge in the form of a dreaded Discretionary Review (DR). 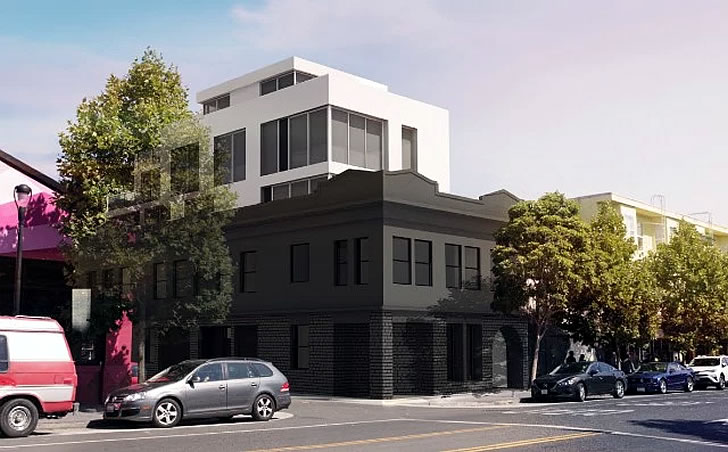 Citing a potential loss of light, increased shadowing of the adjacent building’s ground-floor garden, and privacy concerns, “with many windows and balconies at our property line with direct views of our bedrooms and other living spaces whereas there are currently none,” the neighbors are seeking to force a redesign of the project as proposed, specifically with respect to its eastern mass.

While the architects and project sponsor have agreed to a number of window and balcony changes in order to address a number of the neighbors’ privacy concerns, they’re unwilling to reduce the project’s overall mass. And with the existing bar having been deemed a historic resource, requiring a 15-foot setback from Valencia Street for the proposed addition, there isn’t any room to shift the proposed mass around.

According to the project team: “Contrary to [the neighbors’] statement that we ‘do not want to change the building design’ with additional setbacks, the reality is we cannot make further reductions and have a financially feasible project.”

And with the neighbors’ Discretionary Review having formally been filed, it will now be up to San Francisco’s Planning Commission to decide. The project team had been positioning to start construction, which is to be phased and last an estimated 16 months, “by the end of 2016.”

The Elbo Room’s current lease ends at the end of this year.