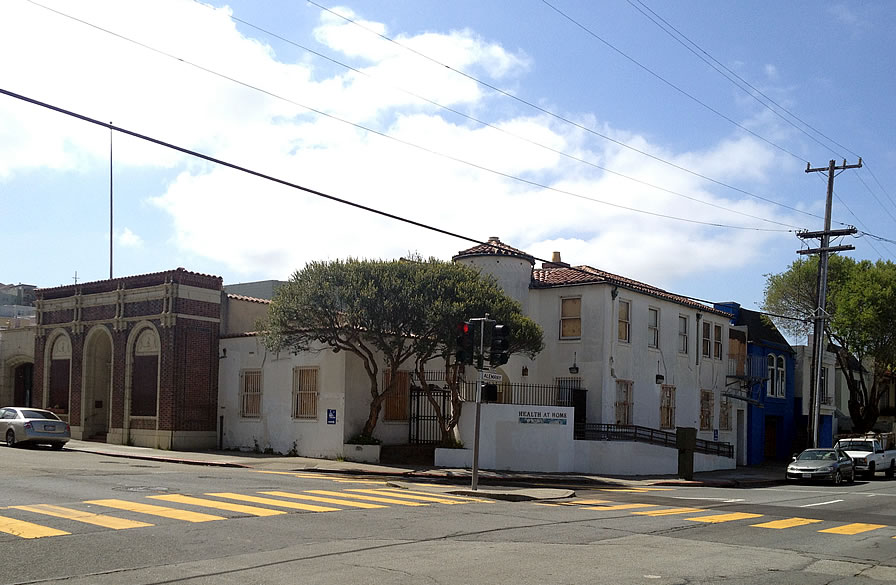 As plugged-in people know, the City has been positioning to sell the two abandoned Alemany Health Center buildings at 35-45 Onondaga Avenue, which sit on two Excelsior District parcels zoned for development up to 40-feet in height, since 2010.

And as we first reported last year, a move to landmark the complex, which includes two murals which were commissioned with New Deal funds and painted by Bernard Zakheim in 1934, was in the works.

From the Application for Historic Landmark Designation which was prepared and filed by the New Mission Terrace Improvement Association:

Funded by a 1928 public bond measure and built in 1933, they [these buildings] extended the City’s emergency hospital system to cover a growing and underserved part of town which today remains predominately populated with modest, single-family homes in a district with few architecturally significant buildings. These buildings were the final piece of the citywide emergency hospital system to be built. It was a system which was once nationally known and respected. The buildings are remnants of a noble, and once controversial, effort to provide free and efficient emergency health care to the district.

The buildings were planned and designed by City Architect Charles H. Sawyer who began his career with the city during the hectic rebuilding of San Francisco after the 1906 earthquake and fire. He also ushered the Bureau of Architecture through the Great Depression. He oversaw the department during a period when innumerable civic buildings were built: schools and hospitals were his domain. San Francisco’s schools
and emergency hospital buildings were once the envy of other cities and earned the respect of professionals across the country. As an administrator, Sawyer was responsible for overseeing the work of the entire department, hiring architects as appropriate. However, there are several buildings for which he himself prepared the plans: the Alemany buildings are two of those and they are significant examples of his work.

The Alemany Hospital was opened and dedicated on 16 August 1933. During the same period of time, across town, painter Bernard Zakheim was organizing artists to win the first federal Public Works of Art
Project (PWAP) grants to create the Coit Tower frescos. PWAP was a predecessor of the WPA programs: Works Progress Administration/Work Projects Administration. Zakheim painted the Library fresco at Coit Tower, and later in 1934, he painted the two frescos at the Alemany Health Center building: Community Spirit and
Growth. These frescos were funded by PWAP, under the sponsorship of the State Emergency Relief Administration (SERA). The Alemany frescos, which depict the neighborhood and a healthcare theme, are
important examples of Zakheim’s work and contribute to the overall aesthetic significance of the buildings.

In the summer of 1978, the threatened closure of the [Emergency Healthcare System] system galvanized the neighbors to organize a protest against the loss of this free emergency healthcare service to the
working class residents of the Excelsior and Outer Mission…. During the previous era of citywide elections, neighborhood organizations collaborated to make sure their voices were heard at City Hall. The
COMO (Communities of the Outer Mission Organization) was one of those groups. It was instrumental in organizing the “sit-in”at the Alemany Hospital. Neighbors moved into the building, eating and
sleeping there for over a month and a half in the summer of 1978. They attempted to continue offering free first aid and emergency services to patients. They waxed the floors, did the laundry, and referred to their effort as “the greatest grassroots movement in San Francisco.”

This event, while modest in scale, and largely forgotten, is in keeping with San Francisco’s heralded tradition of civic engagement. These buildings represent the most important moment of social activism in
the Excelsior District’s history which occurred just months before the fatal and fateful shootings at City Hall. The buildings, the frescos, the hospital system, and this particular act of social engagement should be acknowledged and remembered.

San Francisco’s Historic Preservation Commission is slated to review the application tomorrow.
If the Commission decides to initiate designation of the complex as an Article 10 landmark, a subsequent hearing will be held to consider recommending that San Francisco’s Board of Supervisors, which would have to approve the designation, as well.

While a landmark designation wouldn’t preclude the re-development of the 35-45 Onondaga Avenue buildings, it would greatly limit what could be done. And San Francisco’s Planning Department is recommending the Historic Preservation Commission initiate the designation.