That Rundown Italianate You’ve Been Wondering About: The Plans 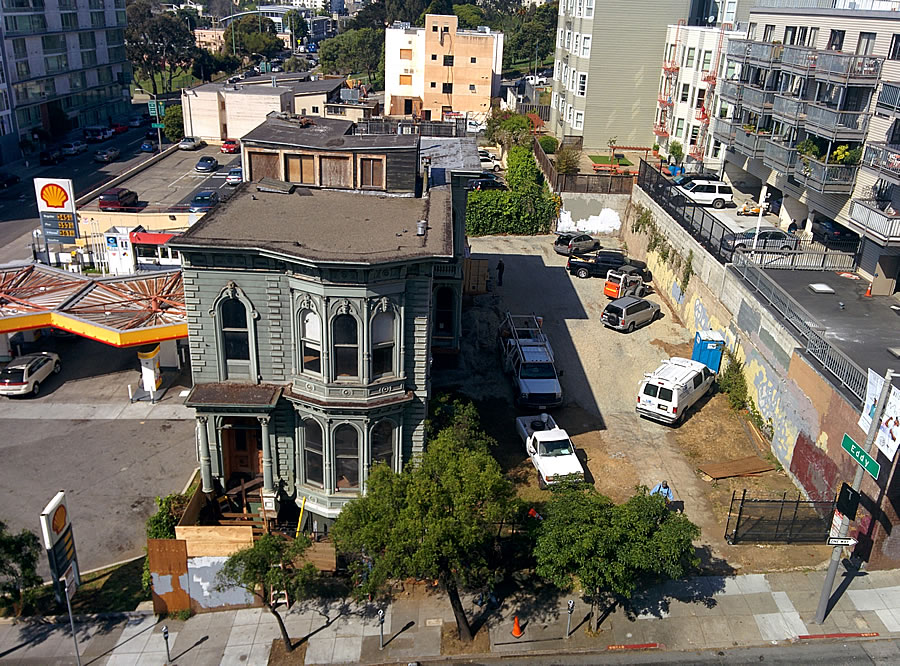 If you have ever crossed San Francisco on Franklin Street, we’d be willing to bet you’ve noticed the rundown Italianate at 807 Franklin, on the west side of the street just after Turk.

Built for the Englander family in 1880, the home’s carriage house burned to the ground in 1950, leaving half the home’s 75-foot-wide lot empty to the north.  And in 1982, the property was bequeathed to the First Baptist Church of San Francisco.

Sold to a private party in 1991, the then-owner subsequently filed for bankruptcy and the property hit the market in 2013 listed for $2.2 million and sold to Brown & Company for $2,650,000. As we noted at the time, “while the existing house is protected [as a historical resource] and in need of “major repairs,” with a lot that’s zoned for 80 feet in height and high density development, the listing touts “tremendous potential for high rise condos” to rise on the undeveloped half of the lot.”

Having sat mostly undisturbed for the past two years, save a squatter or two, a reader has noticed a little activity on the lot, is hopefully the aforementioned “major repairs” are about to take place, and wonders if we know what’s going on. So here’s the scoop:

Plans to renovate the Italianate are in the works, but as foreshadowed above, plans to build an 8-story building on the northern half of the lot are in the works as well, a development which shouldn’t catch any plugged-in readers by surprise.

As proposed, the 80-foot tall building will consist of 51 apartments over a basement garage, a garage which will extend below the Italianate as well. And 807 Franklin will be turned into a six-unit building, with a new third-floor set back from the historic front façade.

In terms of timing, the proposed development is currently under review by the Planning Department and the project has yet to be approved. But permits to fix the existing hazardous stairs and seal up the building have been issued, which is why there is a bit of activity on the site today.