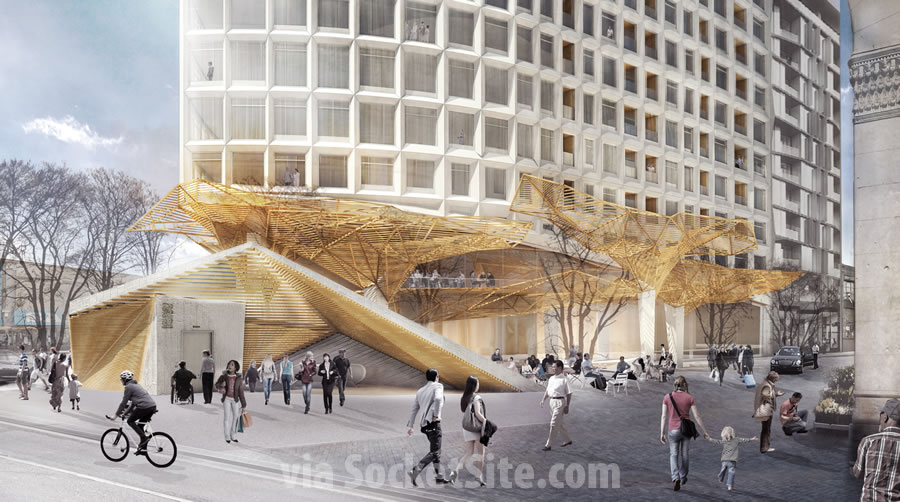 A plugged-in source delivers the first detailed rendering and description of the 19,000-square-foot public plaza which could transform the intersection of Market and Van Ness, at the base of the proposed 39-story tower dubbed One Oak (formerly One Van Ness), where the stubby All Star Cafe currently sits.

From the architects of the project, Snøhetta (plaza) and SCB (tower):

The Plaza will be both an important public space along the Market St. corridor, and a neighborhood and building amenity. For travelers, it will provide a place for pause and relaxation. For the neighborhood and tower residents, it will be an outdoor living room with formal and informal events, cafe dining, retail kiosks, and a small amphitheater. The plaza floor is comprised of two types of surfaces – a carpet of paving stones subdivided by a series of monolithic site cast concrete pads that move freely between the interior and exterior spaces. The dual system, along with raised planters and seating elements, creates cues for pedestrian circulation and programmatic zoning.

Below grade detailing will allow for storm-water detention and irrigation reuse, as well as ecologically sound soil volumes to support lush vegetation. The planting of the plaza largely draws from California’s rich flora with a few, key non-native additions proven to thrive in urban conditions. For instance, London plane trees line the Market Street side of the site offering their shade to the retail and restaurant spaces. A storm-water garden features native fern species and bald cypress. The remainder of the plantings draw from the coastal bluffs and dune lands of California for both drought and wind tolerant species of grasses, trees, perennials, and low-lying shrubs.

The wind mitigation strategy was inspired by a forest canopy. Designed as a light, porous, multi-layered surface, the “canopy” is continuous from the interior where it functions as the support for a retail mezzanine, to the exterior where it provides wind protection for the Plaza. The faceted canopy surfaces are supported on shaped concrete columns which rise from the plaza surface. The canopy references organic structures which have a perceived level of irregularity while actually being sculptural yet ordered by a fundamental set of geometric and physical laws; lending itself to a series of repeatable components.

The rendering above includes the proposed relocation of the existing MUNI escalator and stairs along Market Street, enclosing the MUNI entrance under an amphitheater enclosure, connecting to the existing platform below.

[T]he new enclosure is designed to provide a visual signal for commuters and a clear connectivity with the proposed BRT stop on Van Ness Avenue. Materially tied to the ground plane when viewed from the west, the “roof” of the entry rises up from the plaza to become amphitheater style seating, completing the active retail/gathering/performance zone. At the street side, the roof of the entry relates to the materiality and detailing of the canopies, while extending below grade to create a distinct and iconic environment for travelers entering the space of the Plaza. Skylights allow natural light to penetrate the below grade circulation.

The enclosed entrance to the MUNI station could be locked at night. And at the base of 25 Van Ness, along the northern edge of the Plaza, a series of portable retail kiosks could be deployed, “to activate that side of the street and provide additional retail opportunity.”