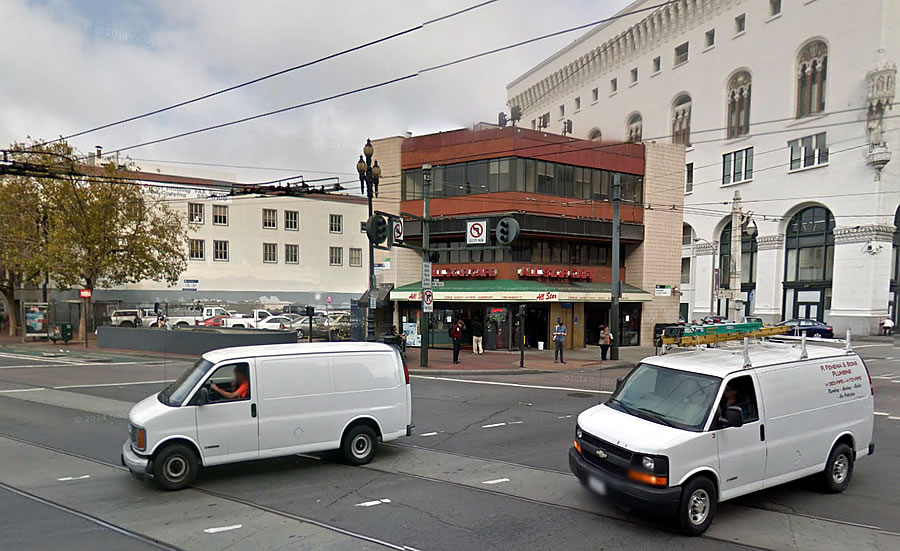 A 400-foot tower which was tentatively dubbed “One Van Ness” is still proposed to rise on the northwest corner of Market and Van Ness, but as a plugged-in reader noted last week on our piece about an adjacent project in the works, it’s no longer Richard Meier’s design which will rise on the site.

And as John King now confirms, Snøhetta has been engaged to take over the design of the development project which was recently acquired by Build Inc. along with GTIS Partners.

Of equal note, the stubby All Star Cafe and doughnut shop on the corner, a previous hold out around which the Meier tower had to be been designed, is now under contract by the development team and should be razed as part of the project.  In addition, the team would like to move and rebuild the existing Muni subway stop on the west side of Van Ness from Market to Oak, on the north side of the project site.

As envisioned, along with the new subway station, an Oak Street public plaza would be constructed at the base of the development, with retail along the streets and around 300 condos in the tower above.

Having designed SFMOMA’s new addition, Snøhetta is currently working on the design for the Golden State Warriors new Arena in Mission Bay.  One Van Ness will be the Norwegian firm’s first U.S. tower project.