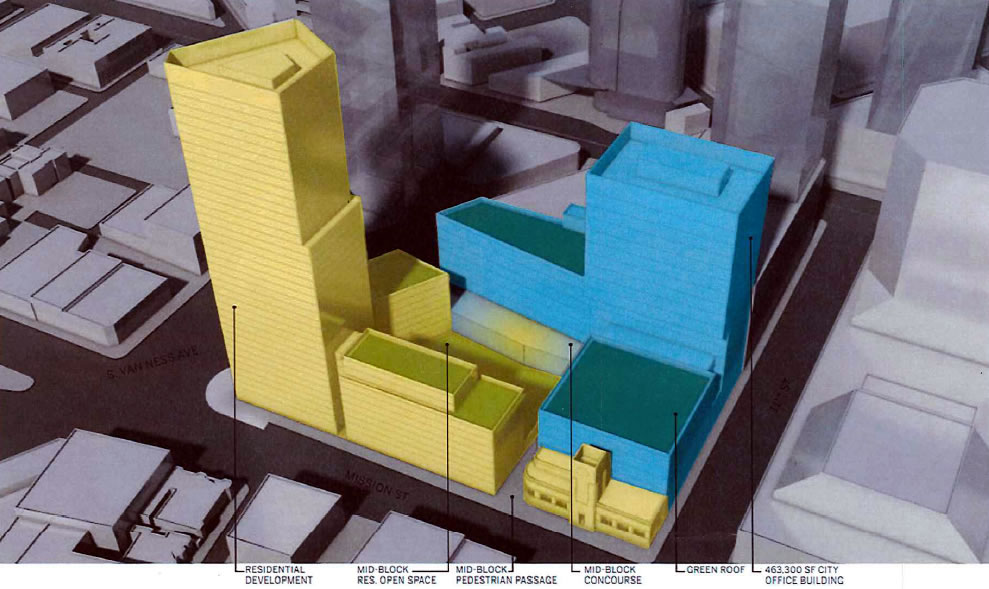 The proposed budget for the City’s new Mid-Market office building to rise up 17-stories along 11th Street between Mission and Market, on the eastern half of the Goodwill site at the intersection of Mission and South Van Ness Avenue, has jumped by almost 30 percent to $327 million.

As we first reported in July, the city was planning to pay Related California an estimated $253 million for the 466,000 square foot office development based on an approved letter of intent, but the final purchase price was to be equal to Related’s actual hard and soft costs for the development of the building, plus development fees of 5 percent and a 5 percent profit (on top of the fees).

Last week, the Mayor proposed an ordinance which would authorize the City to pay Related $30,296,640 for the half of the Goodwill site upon which the office development would rise plus $25,884,132 in pre-development costs and a Construction Management Agreement with an anticipated cost of $270,510,181, for a total anticipated project cost of $326,690,953.

Related is paying Goodwill $65 million for the 1500-1580 Mission Street parcel and is working on plans for a residential tower with 560 units to rise on the western half of the site, a site which sits across the street from the San Francisco Honda site and cater-corner to the Tower Car Wash parcel we featured last week.

The City is planning to consolidate the Departments of Public Works, Building Inspection and Planning, and Retirement and Health Services System in the new office building and hopes to make the move in early 2018.