Razing The Roof Over The Old Francisco Street Reservoir 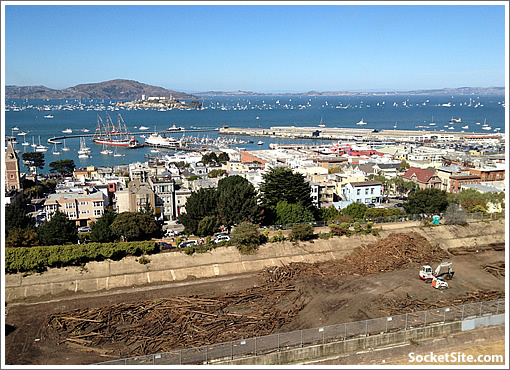 As we originally reported earlier this year, “while San Francisco’s Board of Supervisors passed a resolution reaffirming the reservoir’s status as open space, the resolution was non-binding, the site remains undeveloped and in disrepair, and the market for developable property is picking up.”

While the wooden roof of the reservoir was razed last week, most likely to reduce the rotting hazard, the site remains in the possession of the SFPUC and no plans for the site, as open space or otherwise, are actively in the works as far as we know.

San Francisco’s Planning Department once deemed the Market Street Safeway site “the single largest opportunity site [for redevelopment] outside of the Central Freeway parcels” in the Market-Octavia Neighborhood. The Francisco Street Reservior site is arguably the equivalent for Russian Hill.