The SocketSite Scoop: Francisco Street Reservoir On The Market 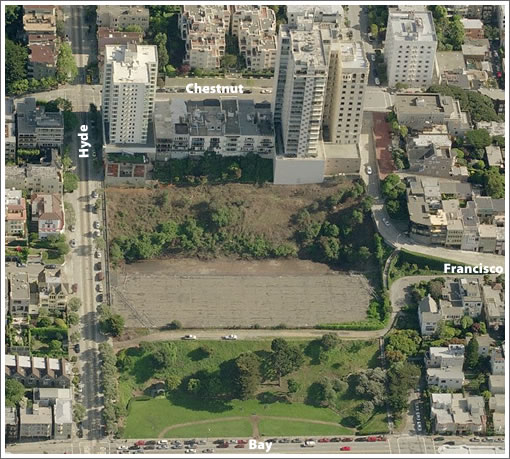 We’re still trying to nail down details (tipsters?), but the word on the street is that the City of San Francisco has decided to put the Francisco Street Reservoir up for sale and development. The completely unconfirmed price tag: up to $70 $50 million.

A number of Russian Hill neighbors are obviously concerned with this turn of events and have organized a neighborhood meeting to be held this evening (2/4 at 6:30pm) at the Norwegian Seamen’s Church (corner of Hyde and Francisco).

UPDATE (2/5): From a plugged-in reader’s comment below: “I attended the meeting. The property nearest Chestnut Street is privately owned. The proposed building(s) would cover the resevoir and potentially the park along Bay Street. I don’t think a figure of $70 million was mentioned – the highest price was $50 million. Much depends upon whether someone is willing to buy the property without any existing ability to build anything – a huge risk.”

JustQuotes: No Carrot, All Stick (Or Should We Say Daly Shtick?)

RandomRumors: One Rincon Hill Walkthroughs Without An Agent?