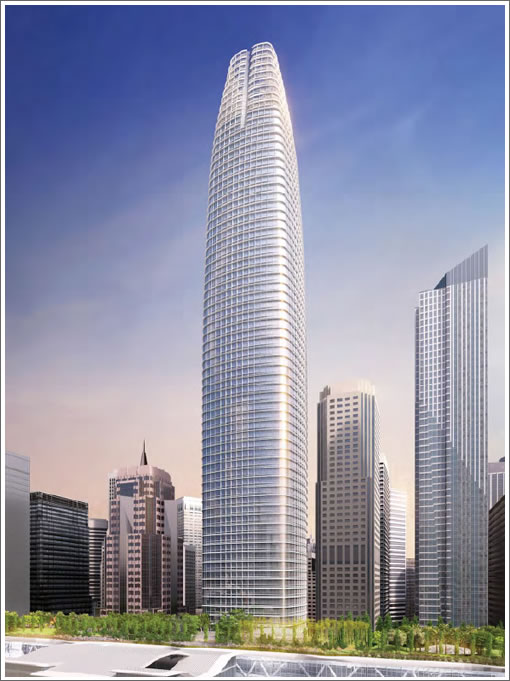 The proposed 1,070-foot Transbay Tower to rise at 101 First Street was approved by San Francisco’s Planning Commission last night. We’ll let you know when the appeal is filed.

In terms of the land on which the tower would rise, while the deadline for Hines to complete the $185 million purchase of the site from the Transbay Joint Powers Authority has passed, and Hines has yet to announce a new financial partner, negotiations continue. 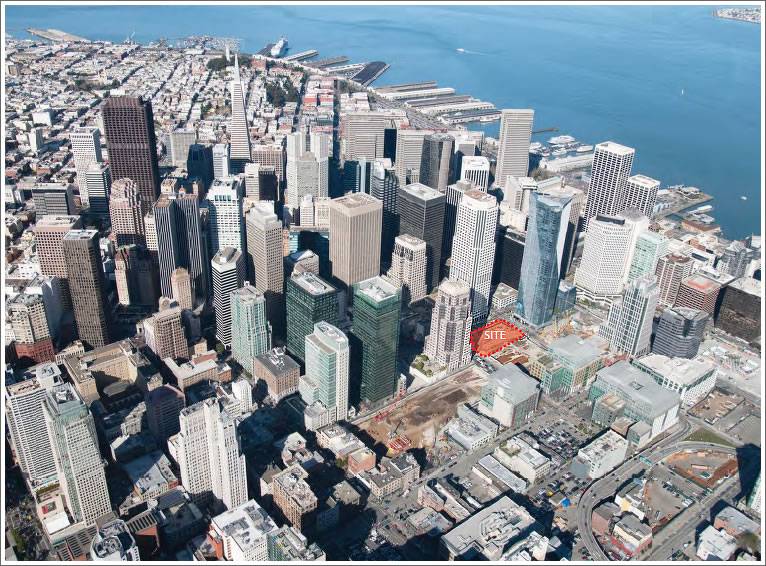 The chance that Hines will fail to complete its purchase of the site (click image to enlarge) and that the Pelli Clarke Pelli design would be shelved? We’d put that at well under one percent. The complete design narrative and details for the 61-story tower:

The Transbay Tower will be a sweeping, iconic addition to the San Francisco skyline, as well as a 21st Century example of smart, sustainable, transit-oriented development. The 61 story, 1,070 foot tall office building will be located on the northern third of the block bounded by First, Mission, Fremont, and Howard Streets. The structure is planned to occupy approximately the northern half of Lot 1 on Block 3720, directly adjacent to the new Transbay Transit Center, on the south side of Mission between Fremont and First.

The tower site comprises approximately 50,000 square feet. It previously served as the passenger waiting, loading and Muni drop-off area for the old Transbay Terminal, demolished in the fall of 2010. When completed, the site will hold the Transbay Tower and Mission Square open space, the primary approach to the Transit Center.

Designed by internationally recognized architects Pelli Clarke Pelli, the proposed tower will have a contemporary style, consisting of a slender, tapering silhouette and employing a metal and glass curtain wall (a non-structural wall of mostly glass) along all four facades. The tower will consist of a single, sculptural vertical element. Although the form is not a traditional three-part (base, shaft and capital) arrangement typical in many of the City’s buildings, the streetwall level transforms in scale appropriate to the pedestrian experience, and the top’s crown will evolve gradually out of the tower’s form and wall texture. Horizontal metal fi ns on each floor will act as sunshades and give the surface texture. To maintain an elegant, respectful character, the tower’s form is a simple, timeless obelisk. The walls rise past the top floor of the building to form, gradually transforming materials making the top lighter, smaller and more transparent, appearing to dissolve into the sky.

The Transbay Tower will have concave curved massing in plan and in section with glass and metal wall on all four sides. The tower tapers as the building rises, beginning at a height of about 380 feet. From there, the exterior walls will slope gently inward on all four sides, giving the building a curving, obelisk-like form. The 172-foot horizontal dimension along each side of the ground floor will reduce to about 138 feet at the building roof, a height of about 920 feet.

A tower of this size must address multiple readings of scale. It must have enough presence of form and detail to be an inspirational point of orientation across a wide urban environment. At the same time, it must be a well-tailored citizen of its immediate neighborhood. In regard to the former, Transbay Tower’s sculpted profile is simple and graceful. Its gentle tapering curves sweep swiftly around curving corners without the harshness of hard edges, like a beautiful vase. The glass will have a high level of energy performance without becoming an oppressively reflective and opaque mass. The metallic accents and sunshades will create a pearlescent white glow so that it harmoniously joins with Transamerica and Coit Towers in defining the skyline. As one approaches the tower, the simplicity of form reveals a richness of texture that is both complementary to the form’s gentle curves, but also boldly three dimensional in its layering. When viewed from the neighborhood, the transparency of the glass allows one to see through the curving corners, creating a sense of lightness, and further enhancing the visual depth created by the metal accent work.

A lattice-like metal and clear glass sculptural crown, approximately 150 feet tall, will complete the top of the building, continuing the building’s tapering shape up to a total height of 1,070 feet. The lattice and clear glass will allow for the passage of sunlight, minimizing shadow impacts the element might otherwise cause. The horizontal dimension at the top of this element will be approximately 89 feet. The sculptural element will enclose and help screen a mechanical penthouse, which is set back from the building’s exterior walls on all four sides. In addition, a distinctive facet has been carved into the center of each face at the top. This facet will allow light to pass through its surface, but is distinctive enough to allow it to catch highlights, and thus be visible across the city. It also offers a simple, effective surface for creating a signature lighting feature during the evening.

The building will include 59 floors of office related space, with two mechanical floors (on the second and sixty first floors). The structure will have a square footprint of roughly 26,000 square feet which decreases gracefully as the tower rises, with curving frontages of just over 170 feet along each side. When completed, the Transbay Tower will contain approximately 1.37 million square feet of office space supported by ample retail space off the ground floor lobby. Additional retail space exists on a portion of the floor connected by footbridge to the planned city park atop the Transit Center.

The building’s exterior wall transforms at Level 5 to create a streetwall datum appropriate to the human scale. The horizontal shades and the vertical fins become bolder and more prominent than the tower wall above. The result is a streetwall, approximately 84’ in height, that blends well with the tower wall above, while creating a strong sense of a base for pedestrians at street and Transit Center park level.

Pedestrians will gain access to the tower lobby from the northwest corner of the site at First and Mission Streets. In addition, a pedestrian bridge on the fifth level will provide a walking connection from the Transbay Tower to the city park on top of the Transit Center. The building will also provide a public elevator via a generous public lobby from the ground floor up to the fifth floor pedestrian terrace, public retail and park bridge – as well as an inclined elevator which rises through the grove of Sequoia redwoods that fill Mission Square. The redwoods are aligned in rows helping to create a variety of public zones in the open space of the Square; from cafe seating spilling out from adjacent retail, benches for reading or relaxing, as well as generous space for pedestrian traffic in and out of the Transit Center.

The building will include some of the latest innovations in building safety and well-being, some of which include a third emergency exit stair, a pressurized fireman’s vestibule, 100% outside air, and a finished ceiling height of 10 feet.

The Transbay Tower will be supported by a concrete slab foundation on piers to bedrock more than 200 feet below grade. The building is a composite structure with floors of composite structural framing surrounding the central reinforced concrete core. The large concrete core provides the lateral strength to resist forces from wind and earthquakes.

For consistency with the depth of the excavation of the adjacent new Transit Center, the Transbay Tower will have three basement levels. To allow for the below grade loading dock, the first basement level will span the entire footprint of the building, as well as the Mission Square open space along Fremont. The second and third basement levels will be decreased in size, shifting inward to the west. Six off -street freight loading spaces will be provided on the first basement level. A single, two-way ramp on First Street, located near the southwest corner of the building will provide access to the parking garage and loading dock. The garage will also contain ample bicycle parking. Shower and locker facilities will be available to support these commuters. Carpool priority parking and electric charge stations will be incorporated as well. Parking, loading, and other subsurface areas will occupy approximately 120,000 square feet.

San Francisco Unemployment Under 7% For First Time Since 2008