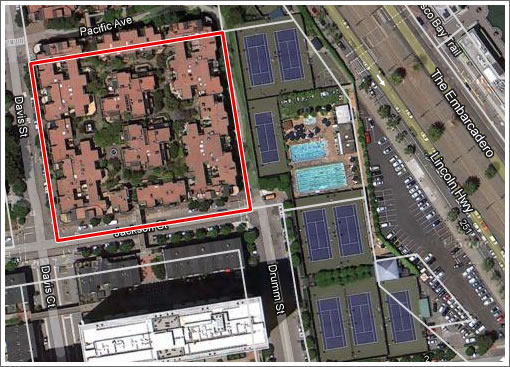 As a plugged-in reader wrote last month with respect to the threatened anti-development referendum that seems to have materialized in an attempt to thwart the approved development of 8 Washington Street:

What the opponents are about is a “referendum”, a provision in the City Charter which allows a law passed by the BOS and signed by the Mayor to be repealed by the voters. The process requires the necessary signature to be collected within 30 days from the day the BOS refused to repeal the law itself. It could trigger a special election. It will take a lot of effort and money to accomplish this task in this short time period.

Of the $150,000 raised to fund the signature gathering for the ballot measure, over half came from a single couple which seems to have left some scratching their heads.

From the listing for the three-bedroom Golden Gateway Commons on condo on Davis Street that the aforementioned couple purchased for $2,400,000 back in 2004:

Rarely available Bay and Bridge view 3 bedroom…This home faces to the east and enjoys views of the Bay, Bay Bridge, Treasure Island, Ferry Building and the pools and tennis courts of the Golden Gateway Club.

Looking for the political views and motivation behind the funding of the anti-development ballot measure? You’re looking in the wrong direction.

Affirming The City’s Commitment, But Not Cash, For St. Luke’s