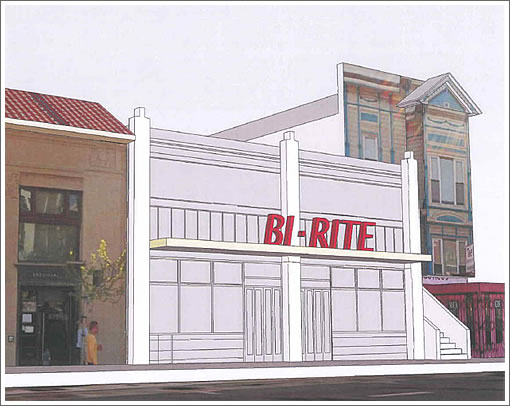 With the store still under construction and an opening now expected in “the early part of 2013,” on Thursday San Francisco’s Planning Commission is expected to authorize and clear the way for Bi-Rite to open their second San Francisco location at 550 Divisadero.

The proposal is a request for Conditional Use authorization…to allow a use size over 4,000 square feet through the combination of a vacant retail commercial tenant space (previously occupied by a grocery store d.b.a. Divisadero Farmer’s Market Liquor & Deli) at 550 Divisadero Street with a vacant commercial tenant space (previously occupied by a grooming and pet supply store d.b.a. Tae Hee’s) to establish an approximately 7,350 square foot grocery store (d.b.a. Bi-Rite).

The proposed hours of operation for the grocery store are 9 am. to 9 p.m., seven days a week. But more importantly, the “Bi-Rite Creamery within the grocery store may consider extending its hours of operation until 10 p.m. on weekdays and 11 p.m. on weekends.”
UPDATE: With respect to a reader’s question about loading zones and the potential for getting stuck behind a truck:

The combined commercial tenant spaces, with approximately 7,350 square feet of floor area, will not require any loading spaces. However, the project sponsor has indicated that they have contacted the San Francisco Municipal Transportation Agency to extend the existing yellow loading zone metered parking spaces in front of 550 Divisadero Street to 542 Diviscidero Street to a width of approximately 66 feet in length which will allow for commercial vehicle loading from 7 a.m. to 4 p.m. Monday through Saturday.

Bi-Rite estimates there will be 10 to 15 deliveries per day with most occurring between 7 a.m. and 2 p.m. and with loading times ranging between 10 and 30 minutes each.
∙ 542-550 Divisadero Conditional Use Authorization [sfplanning.org]