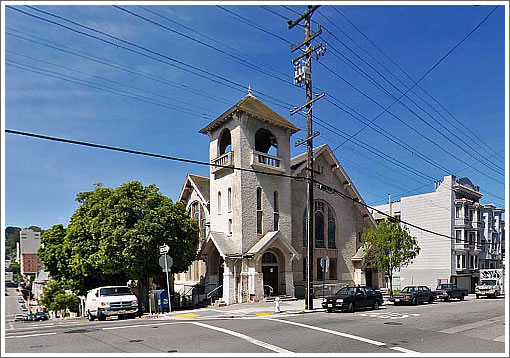 As we first reported in January, while San Francisco’s Planning Commission blocked the proposed demolition of the dilapidated church at 1601 Larking Street and development of a modern Stanley Saitowitz designed building in its place, Ian Birchall was quietly engaged to redesign the project as “a contemporary interpretation of a European city apartment building” in an attempt to appease the Commission and neighbors.

With San Francisco’s Planning Commission continuing to meet behind closed doors to discuss litigation and consider settlement proposals with respect to the development of 1601 Larkin Street, next week the project sponsors will informally present the revised revised design and state of the existing church (it’s bad) to the Commission. 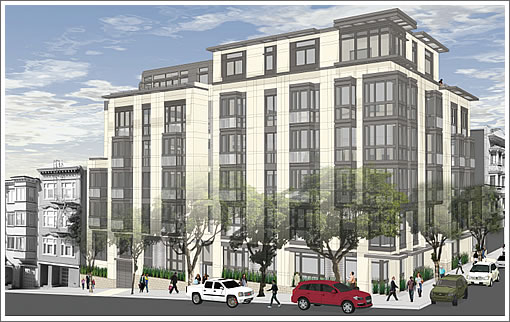 The current iteration of the project proposes the same program as the previous project, involving the demolition of the existing church and the construction of a six-story building containing 27 dwelling units and 29 off-street parking spaces. However, the design of the project has been substantially revised in terms of massing, architectural language, and finish materials.

Specifically, the current design incorporates setbacks above the fourth story along the Clay Street elevation such that the building appears to step with the sloping topography of the block, creating a more suitable transition to the adjacent lower buildings to the west. The sixth level incorporates various setbacks from the roofline, lessening the apparent height of the project by making the uppermost story visually subservient to the remainder of the building. Deep voids have been added at the center of both the Clay and Larkin Street elevations to break the massing of the project into a rhythm of discrete, vertically-oriented modules.

Compared to the previous project, the current design proposes a much higher proportion of solid wall planes versus glazing, and would be finished in a light-colored limestone plaster material. 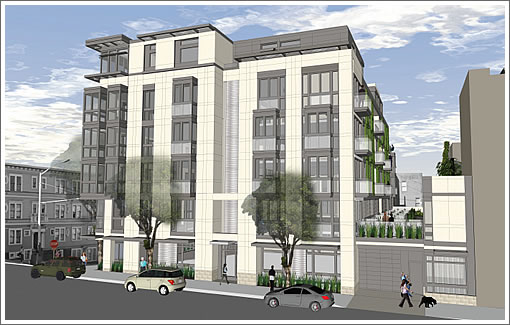 As always, we’ll keep you posted and plugged-in to what’s happening behind the scenes. And once again, the Saitowitz design which was rejected: 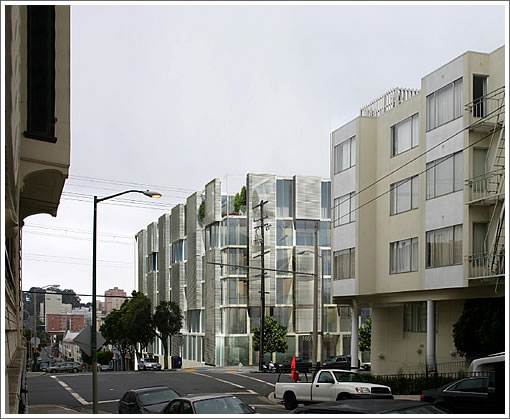 A Tough Week On The Street And Close To Home