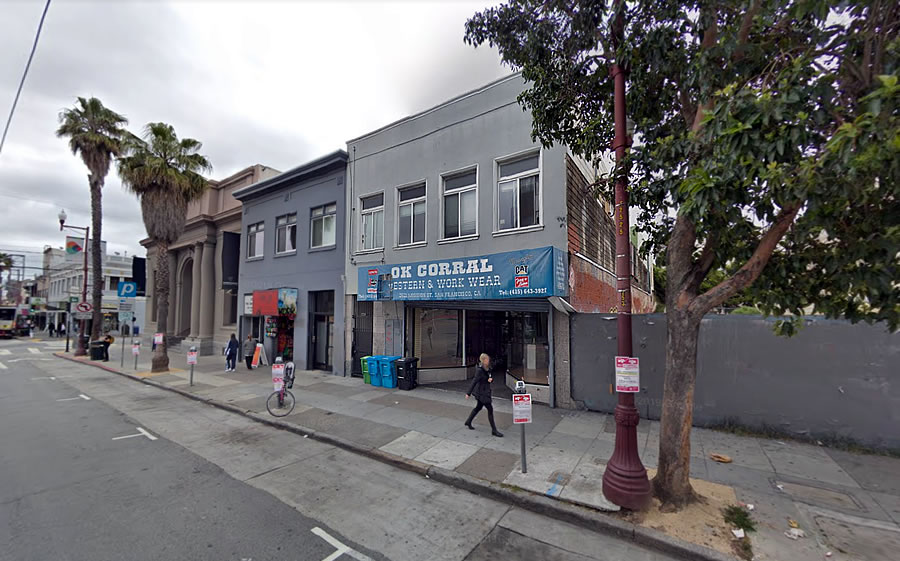 Shuttered back in 2016 after two decades in business, plans to transform the former OK Corral Western and Work Wear building at 2519-2521 Mission Street into a community theater and cafe are in the works.

From the Teatro Tin Tan team which acquired the space for $3.75 million in October of 2017 and includes one of Gordon Getty’s daughters:

“Our vision is a small community theater on Mission Street with an attached cafe in the front. The theater will showcase live acoustic music and theatrical performances from local talent, student ensembles, and (eventually) our own in-house theater company. The café will be a place to gather, eat, and converse before, during, and after performances.

The goal is to foster an inclusive, multicultural community of artists and patrons, as well as to provide paying gigs for local, artists, musicians and neighbors. We want to bring people together, we want to foster relevant conversations, we want to help keep the arts alive.

We will offer Spanish language and bilingual programming, have sliding scale prices, hire locally, and pay a fair living wage to all employees. We will also provide free, and low-cost puppet shows / music classes for families with children, both in English and in Spanish.

We realize that the SF Mission is in a very sensitive situation right now, with intense gentrification and many drastic, devastating changes all over San Francisco in the last few years. We very much want to help and support the neighborhood and not be a destructive force. We do not want to compete with, but rather to strengthen and promote the existing arts and community spaces.”

While building permits for the project (which isn’t to be confused with the plans for a modern improv theater to rise a few blocks away) have yet to be requested, the formal application to make Teatro Tin Tan a reality has been submitted to the City and is now working its way through Planning.