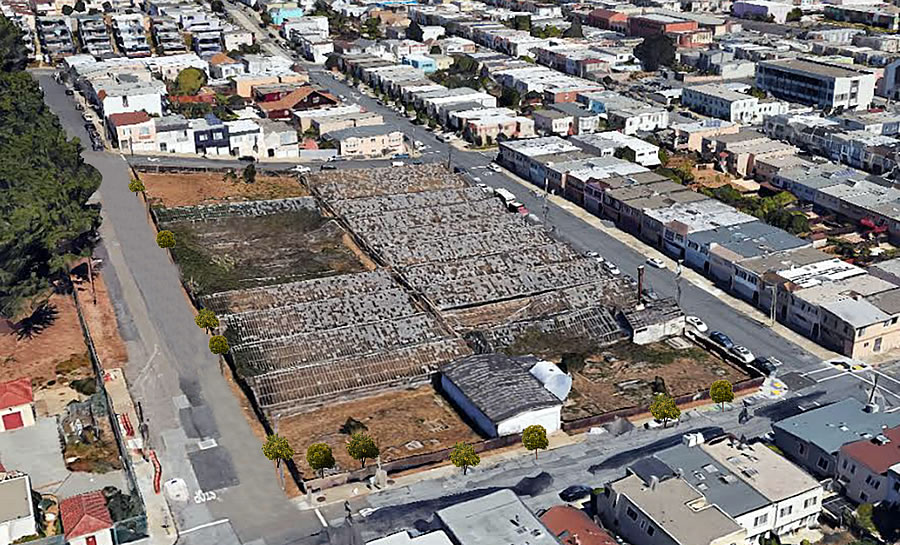 Established back in 1921, the Garibaldi Nursery was one of around two dozen local Italian and Italian-American cut-flower nurseries that dominated the Portola District back in the early twentieth century.  But following World War II, the lands which the nurseries had occupied were largely redeveloped and replaced by housing.

And having shuttered in 1990, the 2.2 acre Portola District block bounded by Woolsey, Hamilton, Wayland and Bowdoin streets, which is known as 770 Woolsey and is currently home to the decaying greenhouse remains of the Garibaldi family’s old University Mound Nursery (a.k.a The Rose Factory), is now the last remaining extant cut-flower nursery site in Portola.

Acquired by Group i for $7.5 million in 2017, plans for a 63-unit development to rise up to 35 feet in height on the site have since been drawn. 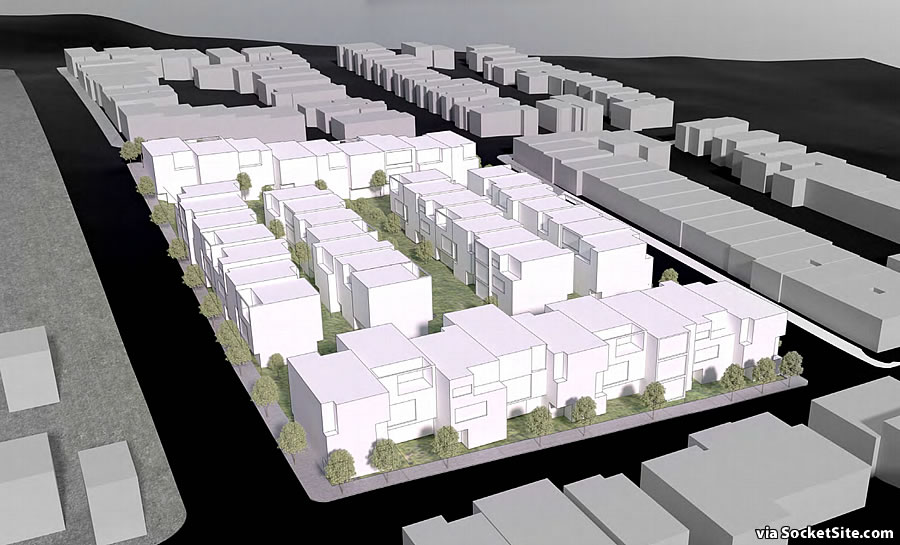 And while a grass roots campaign to co-purchase the parcel along with the PUC and turn the parcel into a community park, farm and flower garden was unsuccessful in raising the necessary funds or a purchase agreement prior to its sale to Group i, the “Friends of 770 Woolsey” haven’t given up hope.

Citing its association “with the commercial flower-growing industry in the Portola District, and for its association with the role Italians and Italian-Americans played in the city’s flower-growing industry,” a formal community-sponsored application to Landmark the block has been submitted to Planning along with a formal Historic Resource Evaluation (HRE) prepared by the Architectural Resources Group (ARG).

From San Francisco’s Planning Department which will present the application and background to the City’s Historic Preservation Commission next week:

“Overall, the Department finds, based on the information provided in the nomination application and project produced HRE, that the subject property appears to rise to the level of significance as required under Article 10 of the Planning Code for an individual City Landmark. Furthermore, staff has reviewed the landmark designation application for 770 Woolsey Street and finds that information presented in the Community Sponsored designation application provides a comprehensive documentation of the subject property’s history.

The Department agrees with the applicant that the property is significant under Criterion 1 both for its association “with the commercial flower-growing industry in the Portola District, and for its association with the role Italians and Italian-Americans played in the city’s flower-growing industry.” Furthermore, as an extant small-scale nursery in the Portola District, staff concurs with the ARG produced HRE, that the subject property is a significant Cultural Landscape under Criterion 3 (architecture) as a rare example of a small-scale urban-agricultural site. Therefore, staff recommends that if added to the [City’s Landmark Designation Work Program], that information and analysis provided in the consultant-prepared HRE supplement the current nomination application.”

And according to Planning, the City has received around 100 letters, along with 183 comments attached to an online petition, in support of the landmarking, with “no known public or neighborhood opposition to [the] designation of 770 Woolsey Street as an Article 10 landmark.”

That being said, the aforementioned new owners of the block and development team, which now includes the Avant Group as well, are very much opposed and “not supportive” of landmarking the site which could either prohibit or limit its redevelopment.  We’ll keep you posted and plugged-in.