With the singular proposal to redevelop the 30-acre Fort Winfield Scott campus in the Presidio having been thoroughly panned by the staff of the Presidio Trust back in April, the proposing team was granted a chance to “update and clarify” its plans.

And with the refined plans in hand and the Presidio Trust Board of Directors meeting at which a go/no go decision is expected to be made scheduled for next week, the Trust’s staff and CEO is recommending that the Board not accept the revised proposal and conclude the Fort Winfield Scott RFP process without awarding the redevelopment rights.

From the CEO’s summary letter to the Board:

Last fall, we offered Fort Winfield Scott as an opportunity to create a campus dedicated to changing the world. We knew that a person or organization would have to put a significant investment into Fort Scott without expecting a financial return to make this happen. We were willing to give up control of Fort Scott, but only for exactly the right proposal.

While nine entities originally responded, in the end, we did not receive a proposal that met the call to action. We received one proposal from a consortium of primarily for‐profit entities expecting a return on their investment that did not meet all of the project objectives and required elements.

“Although the Revised Proposal meets several project objectives, it does not meet two [of the required six]:

(1) Establish Fort Winfield Scott as a mission‐driven campus for the duration of the lease; and
(2) Enhance the Park by supporting the Presidio Trust’s financial sustainability

The RFP asked the respondents to ensure that the campus remain mission-driven for the duration of the lease. Staff found that the original proposal did not meet this objective.

The Revised Proposal might initially appear to meet this objective; the Proposer states that it will form a new nonprofit entity to lease the buildings from the Trust.  However, the new nonprofit entity does not appear to have assets or serve any real purpose.  The vast majority of space (approximately 86%) will be subleased to and controlled by two for‐profit entities – The We Company and OpenAI.  The World Economic Forum would remain in their two existing buildings (1201 and 1202) while EPIC would lease a fraction of the space (approximately 3%) from The We Company.

Moreover, the revised proposal takes on even more debt via loans from commercial banks on market terms.  Should there be a downturn in the market, there’s a very significant risk of default on the loans.  A default on the loans would result in Fort Scott being controlled by banks.  As such, the proposed financing and business terms do not allow the Proposer to make a solid, enforceable commitment to ensuring that Fort Winfield Scott will remain a campus of mission‐driven organizations for the duration of the lease.

In short, despite the addition of the new nonprofit entity, the underlying structure remains unchanged from the initial proposal: The Revised Proposal still is built on delivering a financial return to its investors.  And it continues to lease the vast majority of Fort Scott to for-profit companies. This was not what the Trust had in mind when we issued the RFP.  Worse yet…the Revised Proposal would require the Trust to contribute to the costs of the development, something we explicitly said from the very beginning that we would not do.”

And the staff’s scorecard for the revised proposal overall: 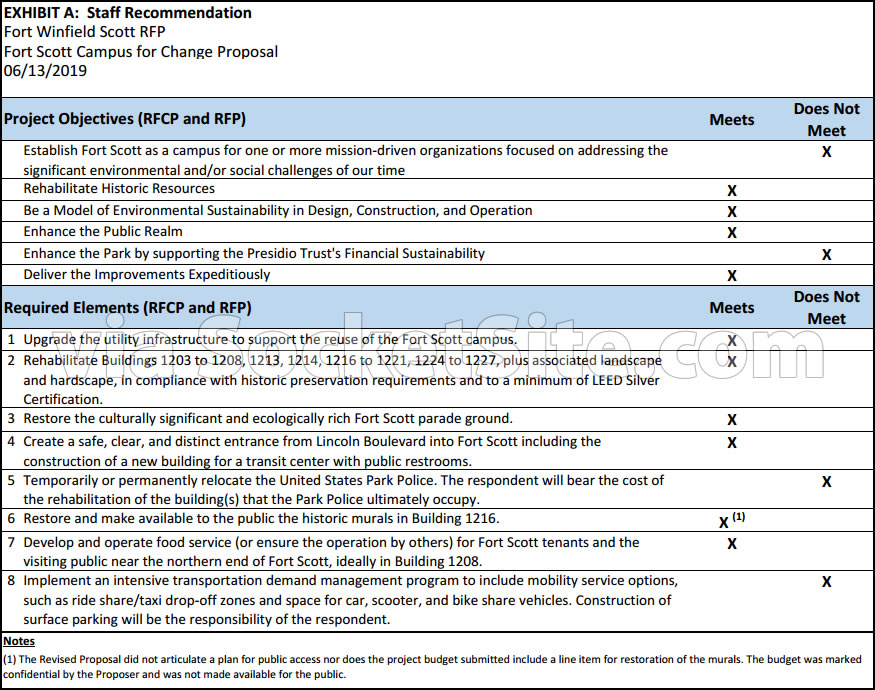