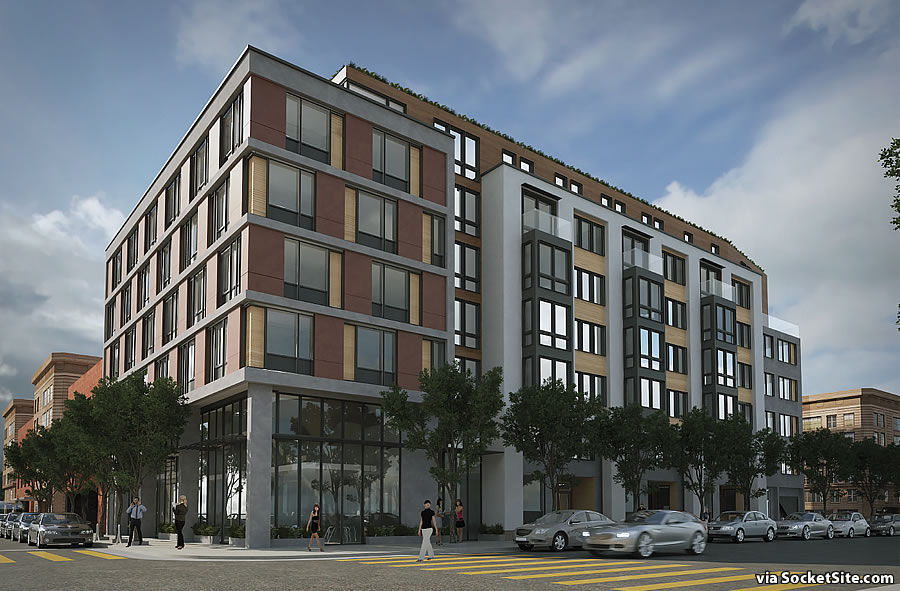 While approved by Planning at the end of last year, an appeal aiming to block the plans for a seven-story development to rise on the northwest corner of Folsom and Russ Streets, upon the Fondue Cowboy and Deli Board site, has been upheld by San Francisco’s Board of Supervisors and the project’s approval has been reversed.

As designed, the 1052-1060 Folsom Street development, which includes the parcel at 190-194 Russ, would yield 63 condos over a garage for 17 cars and 2,800 square feet of new restaurant/retail space on the corner. But at seven stories in height, it would also cast new late afternoon shadows on Victoria Manolo Draves Park across the street, shadows which are specifically governed by Proposition K, San Francisco’s “Sunlight Ordinance,” which was adopted back in 1984.

And while San Francisco’s Planning Department had found that the project’s design was compatible with the pattern of development in the neighborhood, and that the additional shadow cast by the project “would not be adverse and is not expected in interfere with the use of Victoria Manalo Draves Park,” findings with which San Francisco’s Planning Commission had agreed, the findings were successfully challenged by Sue Hestor, on behalf of the South of Market Community Action Network (SOMCAN), last night.

As such, the height of the proposed development would either need to be reduced or its impact reassessed and reconciled with prior Proposition K findings and determinations.  We’ll keep you posted and plugged-in.