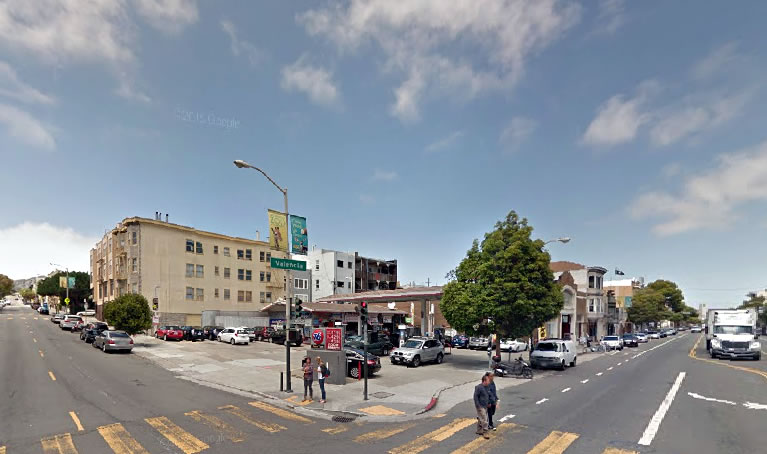 With a refined design by Ian Birchall and Associates, the owner of the 76 gas station on the northwest corner of Valencia and 24th Streets, who has been working on plans for a six-story building to rise on the 1298 Valencia Street site since 2013, will face off against the Mission Economic Development Agency (MEDA) next week. 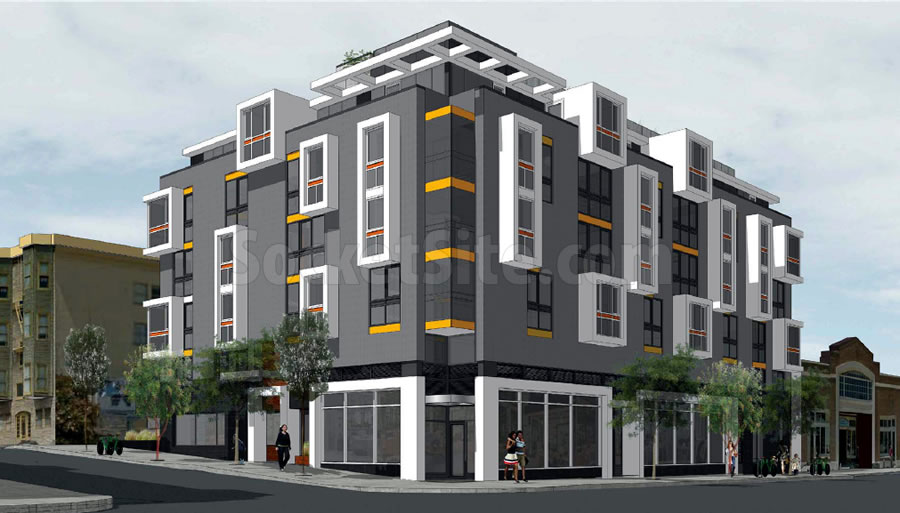 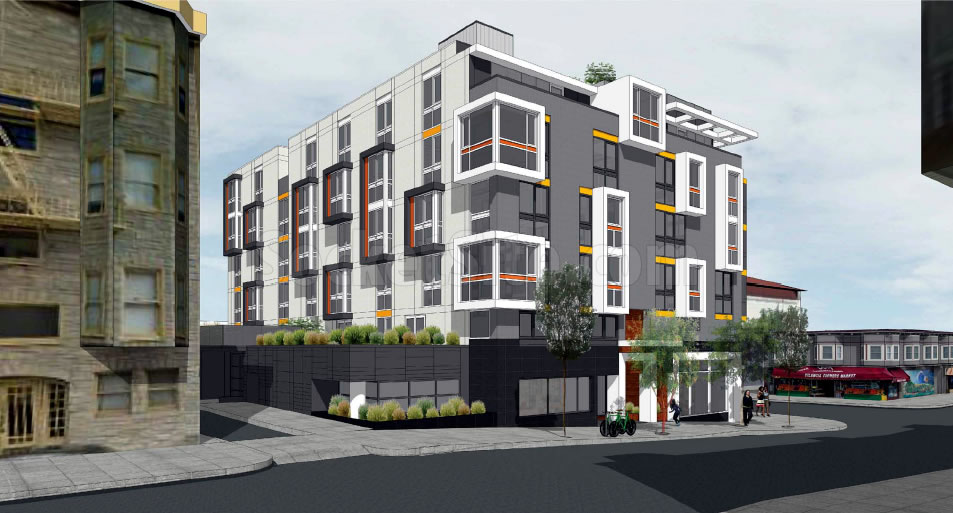 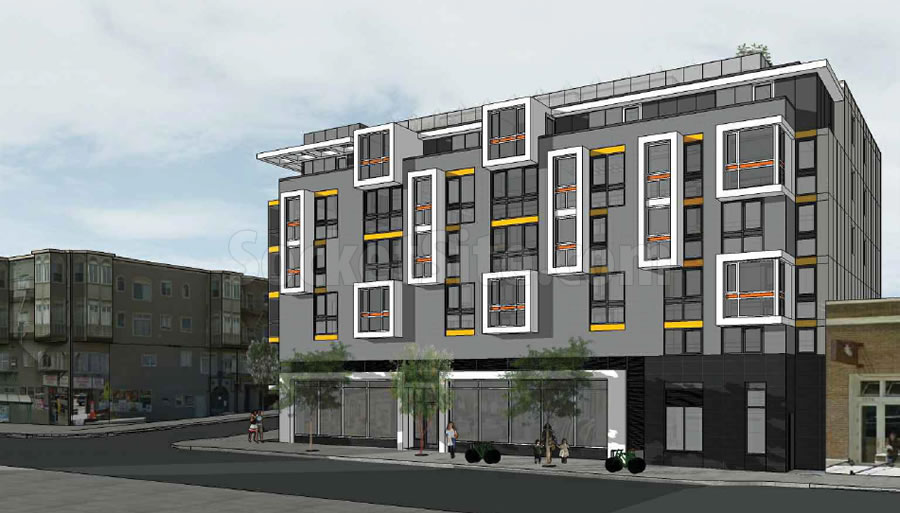 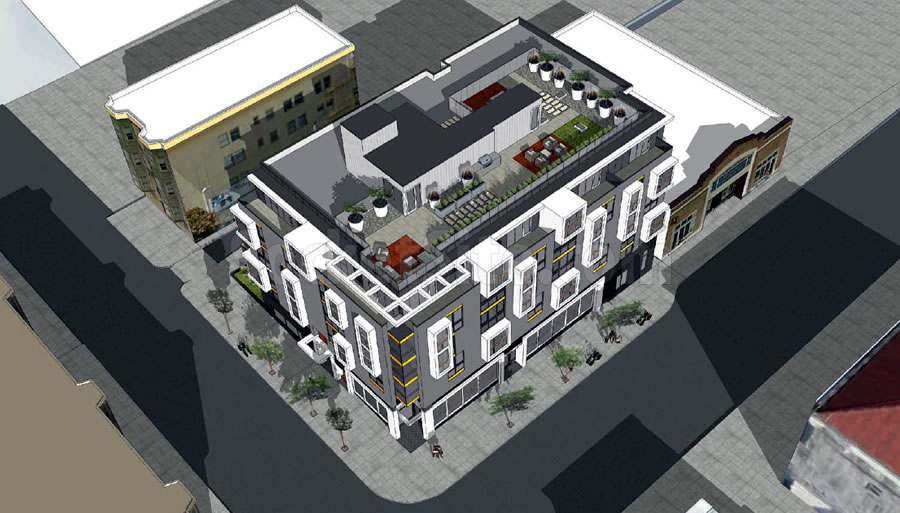 The Project would also remove all the existing gas station curb cuts on Valencia and 24th Streets and provide a new sidewalk and street trees. And while code compliant with no requested variances, and supported by the Mission Dolores Neighborhood Association (MDNA), the Mission Economic Development Agency (MEDA) is seeking to block the development of the site.

From the summary of MEDA’s requested Discretionary Review (DR):

Issue #1: The DR Requestor states the Project is in direct conflict with the General Plan and Planning Code Priority Policy #1, which states that existing neighborhood-serving retail uses be preserved and enhanced and future opportunities for resident employment in and ownership of such businesses enhanced. The proposed building would include luxury units located in the heart of a working-class neighborhood, and eliminate a neighborhood-serving PDR/retail business similar to other automotive repair shops that have been removed in the neighborhood for luxury housing. An alternative that complies with this Policy would maintain significant PDR use on the premises and the employment it provides.

Issue #2: The DR Requestor states the Project is in direct conflict with the General Plan and Planning Code Priority Policy #2, which states that existing housing and neighborhood character be conserved and protected in order to preserve the cultural and economic diversity of our neighborhoods. This Project comprised of luxury housing would be occupied by wealthy residents that will negatively impact the character of this working-class neighborhood and directly and indirectly contribute to displacement impacts that threaten the community’s cultural and economic diversity. The Project would create economic pressures on surrounding commercial and residential tenants leading to evictions and pricing out of nearby community-serving businesses. An alternative that complies with this Policy would be a development that includes a much more significant contribution to affordable housing in this neighborhood.

And from the summary of the Project Sponsor’s response:

Issue #2: The Project Sponsor is not a developer, and is a life-long member of the community in the Mission, and is therefore very sensitive to maintaining the character of the Mission. The Project Sponsor will continue to own the building and will rent or sell the units with the intention of maintaining the cultural and economic diversity in the neighborhood. The Project will contribute 35 residential units to the City’s housing stock. As stated by the Project Sponsor, there are currently no residences at the Project Site. The Project is allowed as a matter of right by the Planning Code, is appropriately sized, is in context with the block, and will contribute to the City’s housing stock. As further stated by the Project Sponsor, gentrification is a broad policy matter that is a legitimate concern and hopefully will be addressed through the Mission 2020 Plan, Board of Supervisors consideration, adoption of amendments to the Housing Element of the City’s General Plan, and adoption of amendments to the Planning Code.

San Francisco’s Planning Commission is slated to issue their ruling next week with the Planning Department recommending the development be approved as proposed.

The 1298 Valencia Street parcel is cater-corner to the infamous Mission District bus stop at which protesters started blocking tech buses four years ago to protest the gentrification of the neighborhood.

Initiative to Establish a 'Thou Shall Not Covet' Policy for S.F.