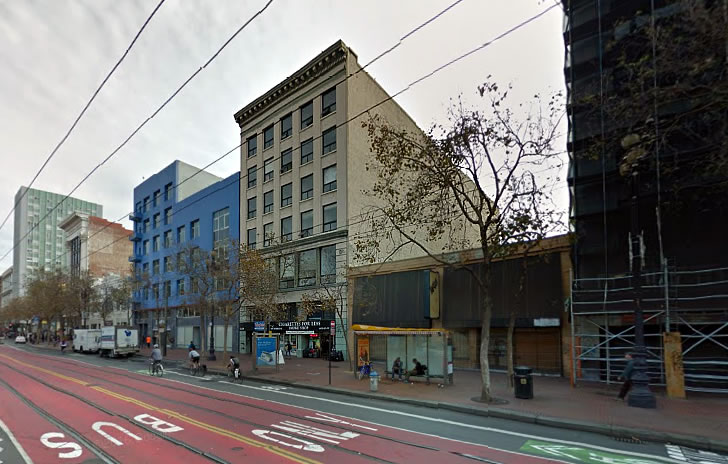 The ongoing battle between the remaining residential tenants of the seven-story Sterling Building at 1049 Market Street, which was illegally converted to “live-work” spaces over a decade ago, back when Mid-Market was a lot less desirable, and the building’s owners, who have been trying to evict the rent-controlled and mostly artist tenants since 2013, is back in front of San Francisco’s Board of Appeals this evening.

While the City had issued a permit for the conversion of 1049 Market Street from its non-compliant residential use back to office space, the permit was suspended “to enable the City to obtain additional details about the building’s historic and current occupancies,” and a high-profile and highly politicized (gentrification, displacement, etc.) battle with the tenants ensued.

When the owners of the building subsequently dropped their appeal of the permit’s suspension, an advocate from the Housing Rights Committee claimed victory from the steps of City Hall and vowed the tenants, who are predominantly artists and each pay around $700 for loft-style units with kitchenettes and shared bathrooms, would “never, never, never” be evicted. And the City subsequently passed additional legislation to further restrict the removal of any existing residential unit in the city, regardless of whether said unit was legally permitted or not.

But the owners have since filed three lawsuits against the City, seeking damages, a court-ordered reinstatement of their permit and clearance to legally proceed with their evictions and office conversion. To which a federal court has essentially sided with the City and the State’s Superior Court has effectively returned the case to San Francisco’s Board of Appeals.

The Superior Court further held that Appellant has no vested right in the Permit, and that Appellant had failed to establish the City had taken its property without compensation under any of the tests for an unconstitutional taking. Instead, the Court specifically found that the Appellant continues to generate income from the live-work units on the sixth floor and the street level commercial units, [and] that the City had placed no limits on the rents that Appellant could charge for those units.

In addition, Appellant had admitted that it continued to rent vacant units on floors 1 through 5 to tech businesses despite the suspension of the Permit, and that Appellant had chosen not to accept rent from its residential tenants as a result of its litigation strategy in its eviction lawsuits, not as a result of any City conduct.

The Court also held that the 2015 Controls were not a “project” for CEQA purposes because they do not authorize or permit any specific construction, and do not compel property owners to illegally convert office units to residential rental use. Nor, after such illegal conversion did the 2015 Controls forbid property owners from converting such units back to their legally permitted use as offices.

And while the building’s owners have appealed the Superior Court’s ruling, they will be back in front of San Francisco’s Board of Appeals this evening, arguing a vested right to their previously issued permits, seeking to have the revocations overturned, and appealing an active notice of violation and penalty for having been caught moving forward without a valid permit and (newly) required Conditional Use Authorization.