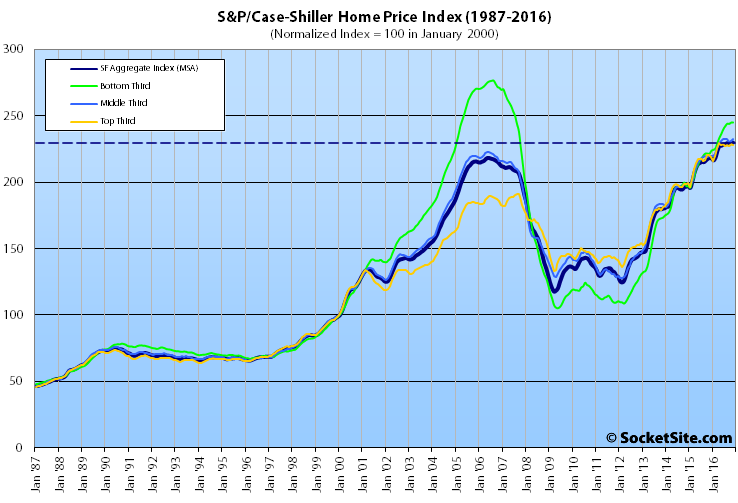 Having inched up in October, the S&P CoreLogic Case-Shiller Index for single-family home values within the San Francisco Metropolitan Area – which includes the East Bay, North Bay and Peninsula – slipped 0.1 percent in November while the index for Bay Area condo values inched up by the same amount.

At the same time, the national index for single-family home values inched up 0.2 percent. And the only three Metropolitan Areas to record declines were Chicago (0.8 percent), Detroit (0.1 percent), and San Francisco.

On a year-over-year basis, the aggregate index for area single-family homes is still running 5.3 percent higher. But that’s the smallest year-over-year gain since the third quarter of 2012 and the gains have been trending down for over a year, with the upper end of the market expressing signs of weakness.

While 10.5 percent higher versus the same time last year, the index for the bottom third of the Bay Area market was unchanged in November and remains 11.4 percent below its 2006-era peak.

Home values for the middle third of the market gained 0.5 percent in November and are running 5.8 percent higher versus the same time last year but remain 0.2 percent below an August 2016 peak.

And while the index for the top end of the market remains 19.0 percent above a 2007-era peak, it dropped 0.5 percent in November and its year-over-year gain of 3.3 percent is the smallest since mid-2012 and has been trending down since October of last year.

Having inched up 0.1 percent in November, the index for Bay Area condo values remains 4.2 percent higher versus the same time last year and 21.3 percent above its previous cycle peak in October 2005. 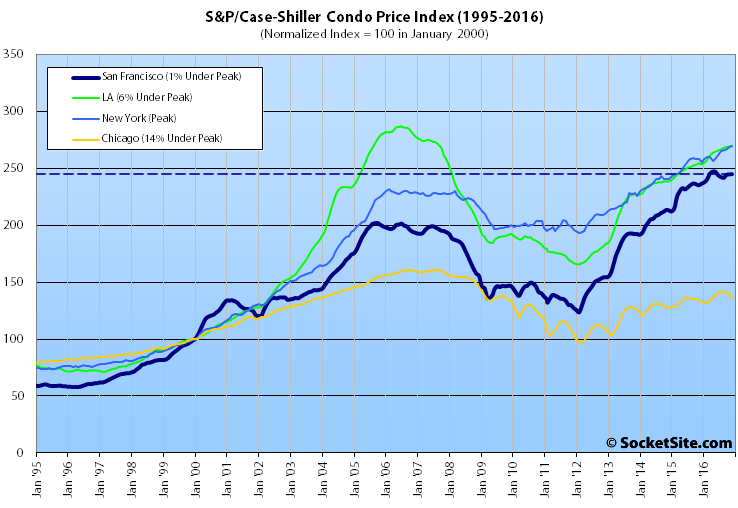 And for the ninth month in a row, Seattle, Portland and Denver have reported the highest year-over-year gains in the index for single-family homes, up 10.4 percent, 10.1 percent and 8.7 percent respectively.