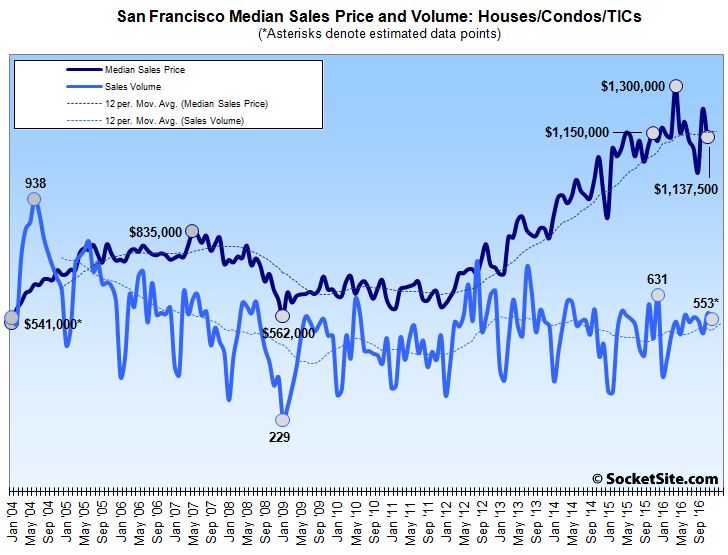 The estimated number of Bay Area single-family homes and condos that traded hands this past December (7,136) was 9.1 percent lower than in December 2015, having dropped 4.4 percent from the month before at a time of the year when sales typically rise.

And in San Francisco, the year-over-year drop was even more dramatic, with an estimated 553 homes trading hands last month, down 12.4 percent on a year-over-year basis and having dropped 3.2 percent from November versus a typical 7.9 percent seasonal gain.

CoreLogic’s data for San Francisco County in December was estimated, however, as the final tally was unavailable at the time of its report.

As we noted three months ago, the recorded sales volume in San Francisco was being goosed by contracts for condos in new developments that were signed (“sold”) many months prior but were closing escrow in bulk as the buildings came online in the middle of 2016. At the same time, signatures on new contracts were down 25 percent in 2016 despite an average of nearly 50 more inventory throughout the year.

While the median price paid for a home in San Francisco isn’t yet available for December, it was $1,137,500 in November, down 1.1 percent on a year-over-year basis and 12.5 percent below the record $1.3 million median sale price recorded in April of 2016.

In Alameda County, recorded homes sales in December (1,563) were 7.5 percent lower on a year-over-year basis with a recorded median sale price of $685,000, down 2.2 percent from November but 5.4 percent higher versus the same time last year.

The median price paid for a Bay Area home overall was an estimated $676,000 in December, down 1.9 percent from November but 4.0 percent higher versus the same time last year.