The Better Market Street project has identified three alternatives for redesigning the 2.2‐mile segment of Market between Octavia Boulevard and The Embarcadero, alternatives which include the possible redesign of the 2.3 mile stretch of Mission Street from Valencia to The Embarcadero as well.

With an overarching goal of making Market Street “the signature sustainable street in San Francisco and the Bay Area by creating a memorable and active identity, with gathering spaces, the ability to promenade, and a vibrant public life,” the Better Market Street project includes both transportation and streetscape improvements, with new transit‐only lanes, boarding islands, street life zones and separated bike lanes or cycle tracks on either Market or Mission.

An overview of the three alternatives, the Impact study of which formally kicks-off today: 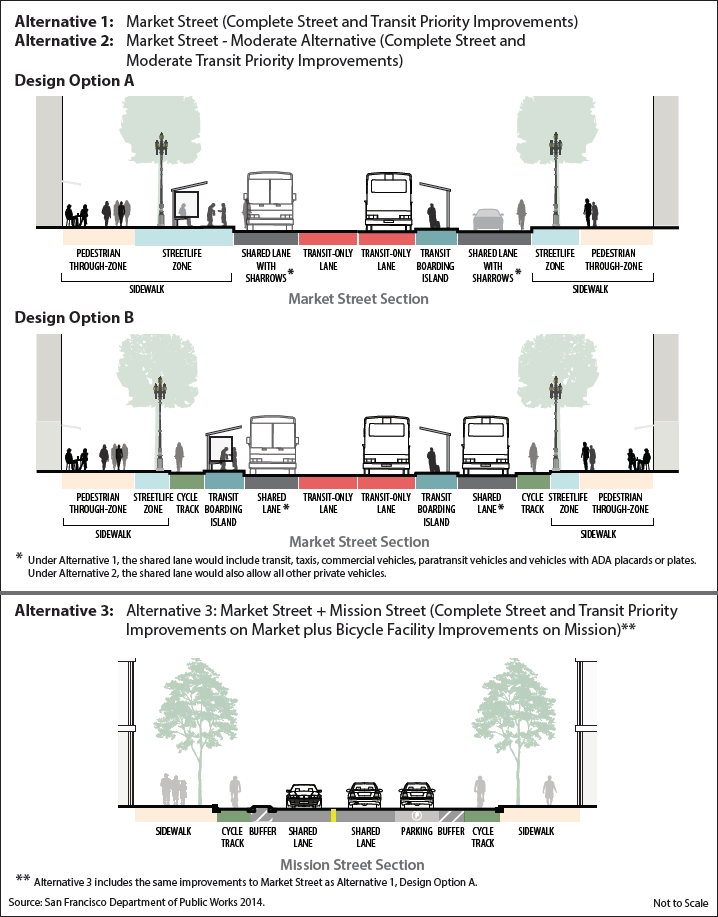 Under Alternatives 1 and 2 Design Option A, an enhanced version of the existing shared vehicle and bicycle lane with painted sharrows (shared lane pavement markings) would be provided at locations where a dedicated bicycle facility is not already present.

Under Alternatives 1 and 2 Design Option B, a new raised cycle track (an exclusive bicycle facility that is physically separated from motor traffic and is distinct from the sidewalk for the exclusive or primary use of bicycles) the entire length of Market Street would be provided, except at locations where the Bay Area Rapid Transit (BART)/Muni entrances or other obstructions would not allow it.

Alternative 3 includes the proposed bicycle facilities on Market Street described under Alternative 1, Design Option A and adds a cycle track in both directions on Mission Street.

The Environmental Review for the estimated $400 million project will run through the middle of 2016 with the design of the selected alternative refined and specified through the end of 2017.

And if all goes as planned, the City’s Better Market Street project, which kicked-off in 2011, will break ground in 2018.