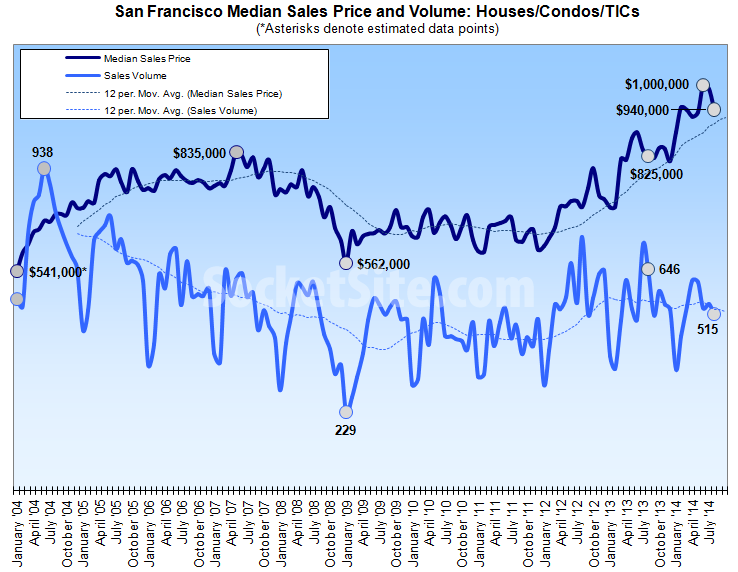 Having hit a record $1,000,000 in June, the median price paid for a property in San Francisco dropped to $940,000 in August, down 5.1 percent from the month before.  And while the median typically drops from July to August, the drop has averaged a little over 2 percent over the past nine years.  That being said, the median price paid for a home in the city remains 13.9 percent higher on a year-over-year basis and 67 percent higher than the recent low-water mark of $562,000 recorded in January of 2009.

At the extremes around the Bay Area in July, Napa County recorded the second highest drop in sales volume behind San Francisco, down 18.2 percent versus the year before with a median price that’s a nominal 1.6 percent higher, year-over-year.  San Mateo recorded the smallest drop in home sales versus the same time last year, down 1.3 percent with a median sales price of $800,000, up 10.8 percent year-over-year.

And while the number of homes sold in Alameda dropped 13.9 percent last month versus the year before, the median price paid was 19.1 percent higher, the greatest percentage increase across the Bay.

DataQuick reports recorded sales which not only includes activity in new developments, but contracts that were signed (“sold”) months prior but are just now closing escrow (or being recorded) and any properties that were sold “off market.”