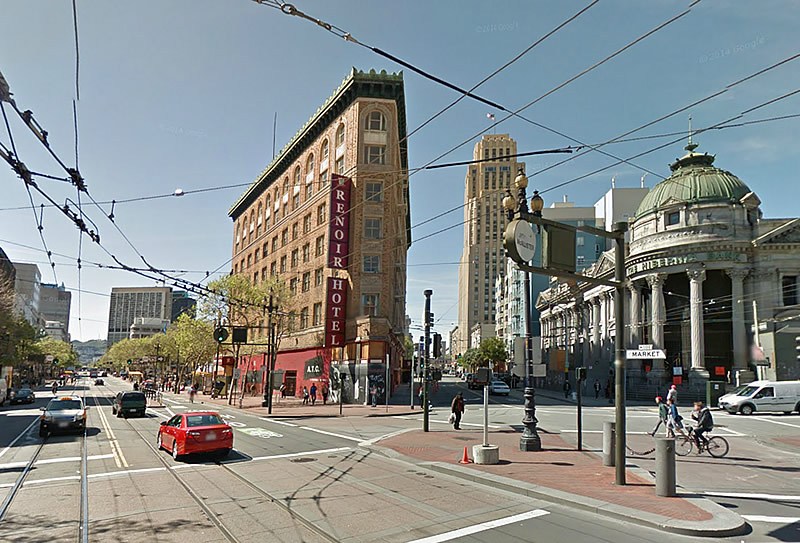 A plugged-in reader and former employee of the Renoir Hotel provides a fantastic breakdown of the Mid-Market building’s storied history and transformation over time:

The origins of the Renoir Hotel go actually back to the years 1900-1904 when famous San Francisco architect Albert Pissis designed and built the Callaghan Building – originally a six story office building – at the gore of Market and McAllister at Jones Street, across the street from the Hibernia Bank at 1 Jones Street (another National Landmark designed by Pissis) along with the Flood Building and the Emporium.

The 1906 earthquake and fire completely destroyed the Callaghan Building just like the nearby City Hall.  However, it was soon rebuilt as a two-story building on the same foundations for office use with ground-level stores and boutiques.

In 1926/27, the lower floors of the building were totally remodeled and five additional stories were added under the plans of H. A. Minton, the successful architect of the Bank of Italy Building in San Jose which is considered to be one of the Bay Area’s first “earthquake-proof” constructions.

The new building reopened as a first-class, four-star property under the name “Hotel Shaw.” In the 1930′s and 1940′s, the hotel catered to the rich and well-to-do. Located at a major Market Street intersection in the heart of San Francisco’s vibrant Theater District, it was one of the places to be in San Francisco. The hotel was named the Hotel Shaw up until December 31, 1982 when June Enterprises sold it to a group of overseas investors (Hotel Shaw, Inc.).

After a $1.5 million renovation the name was changed to “Hotel Miramar” and it was put up for sale six months later. The hotel was finally acquired by the Hotel Group of America (now Personality Hotels) who renamed it “United Nations Plaza Hotel.”

Since 1986, the building has been listed on the National Register of Historic Places as part of the Market Street Theatre and Loft District, which is comprised of 131 acres containing twenty contributing buildings.

The property was purchased by the Yee Family in 1993. The new proprietors renovated the lobby to its neo-classical ambience and renamed the property “Renoir Hotel.” On February 16, 2012 the Kor Realty Group purchased the Renoir Hotel and it was closed on April 16, 2013 to begin a major renovation.

The extent of the damaged done by the fire at the Renoir on Monday and its impact on the renovation remains unknown.