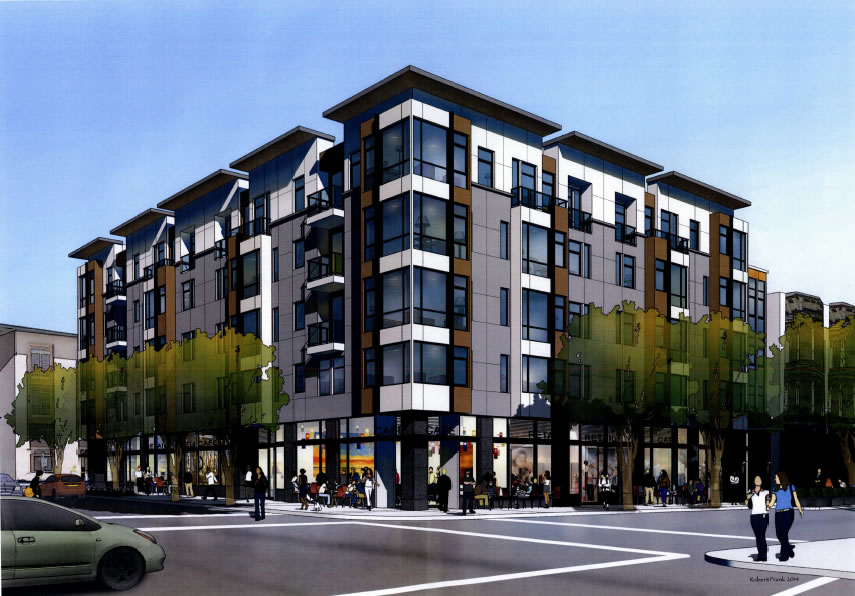 Plans to raze the current Hayes & Kebab building and parking lot at 580 Hayes Street and construct a five-story building with 29 market-rate condos over ground floor retail and a basement garage for 20 cars could be approved this week.

As designed by Sternberg Benjamin Architects, the condos would average 1,080 square feet; the 8,000 square foot retail space could be configured to accommodate up to three separate restaurants with a fourth retail space along Ivy; and a central courtyard on the second floor would serve as the rear year for the Hayes Valley development.

Five of the proposed twenty parking spaces would be set aside for the retailers and the development team is planning to pay a fee rather than build any Below Market Rate (BMR) units on site.

The Art Modern building that currently sits on the 580 Hayes Street site was constructed as a neighborhood grocery store for Safeway in 1939 and plans for a five-story residential care facility for 90 seniors had been approved to rise on the corner parcel back in 2005 but never broke ground.

Should the new plans for 580 Hayes Street be approved, and we fully expect that they will, the paperwork to secure permits for the development has already been filed and they’re planning for a quick start.