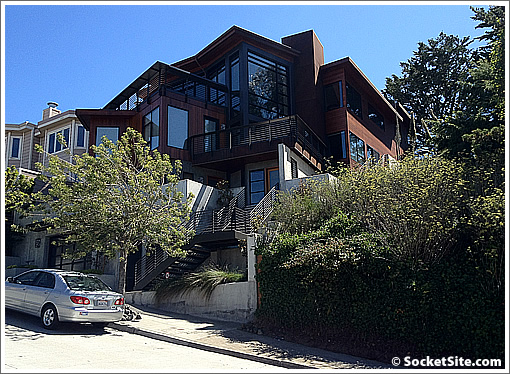 As we first reported earlier this week, the approved plans for a staggered three-story over garage Noe Valley home to be built at 645 Duncan Street have been challenged by the “Noe Valley Neighbors” who have gathered support for their requested Discretionary Review to overturn the project’s approval by characterizing it as “a precedent setting five story single family home in Noe Valley, potentially altering the character and charm of this neighborhood forever.”

As we pointed out, the proposed “precedent setting” home would rise adjacent to 625 Duncan Street, the modern 6,000 square foot home above which was built in 2008 and is currently the second most expensive home in the neighborhood having been bought by the former COO of MobiTV for $5,818,000 in 2008.

And as a number of plugged-in readers correctly surmised, the “Noe Valley Neighbors” who filed the Discretionary Review and are campaigning for its support based on their concerns for the “the character and charm” of neighborhood are none other than the owners of 625 Duncan whose charming views to west would just so happen to be blocked by the new home.

The Plan To Revive One Ferry Plaza

A Redevelopment Home Run (With An Asterisk)