A Rather Ironic Noe Valley Fight Continues, Decision This Week 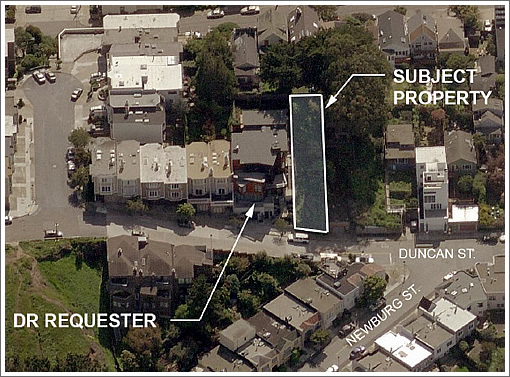 As we first reported two weeks ago, the driving force behind the requested Discretionary Review (DR) to downsize the proposed 4,820 square foot single-family home to be built at 645 Duncan Street are the owners of the 6,000 square foot home next door who have characterized their campaign as a fight to preserve “the character and charm” of the neighborhood.

With the design for 645 Duncan having been revised to address a number of stated concerns, including the elimination of a proposed fifth floor which would have been within the permitted height limit for the site, San Francisco’s Planning Commission will now decide whether or not the development will be allowed to move forward as proposed:

Adding to the irony, the owner of the rather charming 1,400 square foot home to the west of the proposed project is actually on the record in support of the development as well.

The Three Competing Designs For The Presidio's Commissary Site

Final Proposals For Presidio Development Due By Five PM Today