Sixteen Proposals For Presidio Site Including A Lucas Arts Museum 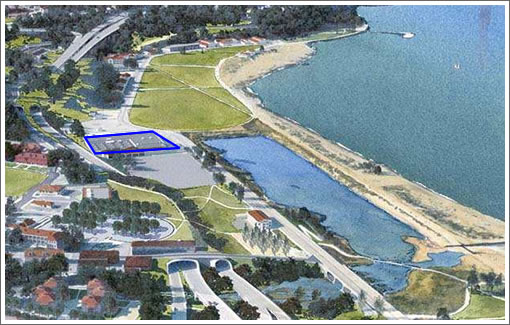 The Presidio Trust has received 16 proposals for reusing the former Commissary and current Sports Basement building at Crissy Field as a cultural facility, including one by George Lucas to create the Lucas Cultural Arts Museum on the site.
As many might recall, it was only a few years ago that Donald Fisher and his family abandoned their efforts to build a contemporary art museum at the Main Post of the Presidio having butted heads with NIMBY neighbors and preservationists.
The 15 other concepts for the Commissary site and timing:

Audio/Media tour provider: Tour center for the Presidio (Antenna International)
The Bridge/Sustainability Institute: An education institution integrating the social, economic and natural history of the Presidio. (Chora/WRNS)
Presidio Regional Center: A center for the study of Cities of the Future and a headquarters for ideas to establish a Regional/Metropolitan Form of Governance for the Bay Area’s 9 counties and 101 cities. (Jay Claiborne/Jerry Goldberg)
The Color Lab: A color museum and laboratory “where people can come to explore the great wonder and beauty that is color and what it means to them and how it enhances their everyday lives.” (Color Foundation)
Global Observatory: A cultural center that looks forward, showcases outstanding solutions for creating a better world and accelerates people’s creative impulses to help. (The GO Team)
Presidio Exchange: Extending the core themes of the Presidio to regional, national and international audiences (Golden Gate National Parks Conservancy)
PlayLabs: An institution to explore the connections between play and innovation, connecting arts and humanities to sciences and history. (JCC&A)
Green Museum and Environmental Center: Museum chronicling the rise of environmental issues and causes over the last fifty years and a resource and learning center displaying the technology, techniques and trends involved in combating climate change and creating a sustainable society. (Mark Kitchell)
Altered Lands: Design, programming and education strategies to portray how humans have shaped our environment through history, art, science, and cultures as it relates to the Presidio, the San Francisco Peninsula, the GGNRA, the Bay Area, Northern California and the Pacific West. (KV & Associates)
National New Deal Museum: Focusing on the U.S. government’s response to the Great Depression, the New Deal Museum would invite visitors to look to the past, reflect on the present, and provoke thinking about how we as a nation can create a more equitable society. (The Living New Deal)
The Innovation Center: A hub for thought and discussion (Mycotoo)
Michael Heyman Journeys Center: A cultural center with interactive galleries to honor former Cal chancellor Michael Heyman (Larry O’Reilly Associates)
Crissy Field Cultural Center: A proposal to reclaim the landscape back to nature and reuse the building as community centered facility with exhibits, classrooms, work space, public space, and a cafe. (Organic Architect)
History Center of the Golden Gate: A history center for visitors to discover how the West helped shape the nation. (Presidio Historical Association)
San Francisco Media Technology Center: A space to support and encourage innovators, artists, inventors and entrepreneurs (Transmedia SF)
Finalists will be announced in April with the winning concept expected to be announced later this year or early in 2014. The Trust continues to work with Sports Basement to find a permanent replacement location within the Presidio.
∙ Presidio Parkway’s Final Phase And Commissary’s Sporting Days [SocketSite]
∙ Commissary Proposals [presidio.gov]
∙ The Fishers Break CAMP With Respect To The Presidio’s Main Post [SocketSite]

If San Francisco Grows By 150,000 People, Where Will Everyone Live?