The Presidio Was Packed With Opposition, But Does It Even Matter? 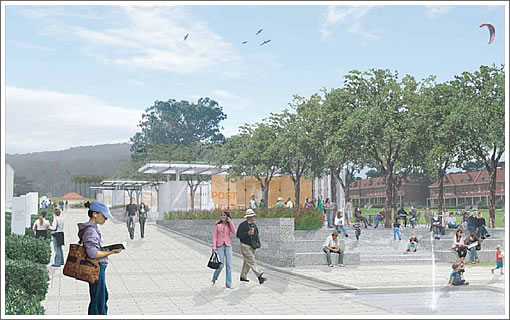 It was a spillover crowd of well over 500 people at the Presidio Trust’s public hearing on the redevelopment plans for the Presidio’s Main Post last night.
And while we missed it, the word on the street is that crowd was most definitely anti-CAMP (Contemporary Art Museum at the Presidio). And so much so, that apparently Mayor Gavin Newsom was openly jeered for speaking out in favor of the plan.
The deadline for public comment has been extended to September 19 with a few more public meetings to be held before (including a July 28 workshop specific to traffic and parking). But with the final decision up to the Presidio Trust Board of Directors, and the Presidio under exclusive federal jurisdiction and “not directly subject to state and local land use plans, policies, or regulations,” we’ve heard more than one plugged-in person suggest that they’ve already made up their minds (and the opposition be damned).
∙ JustQuotes: Presidio Plans, Proposals, And Preservationist Protests [SocketSite]