Scoping The Warriors Arena Impact And Options, Like Moving Red’s 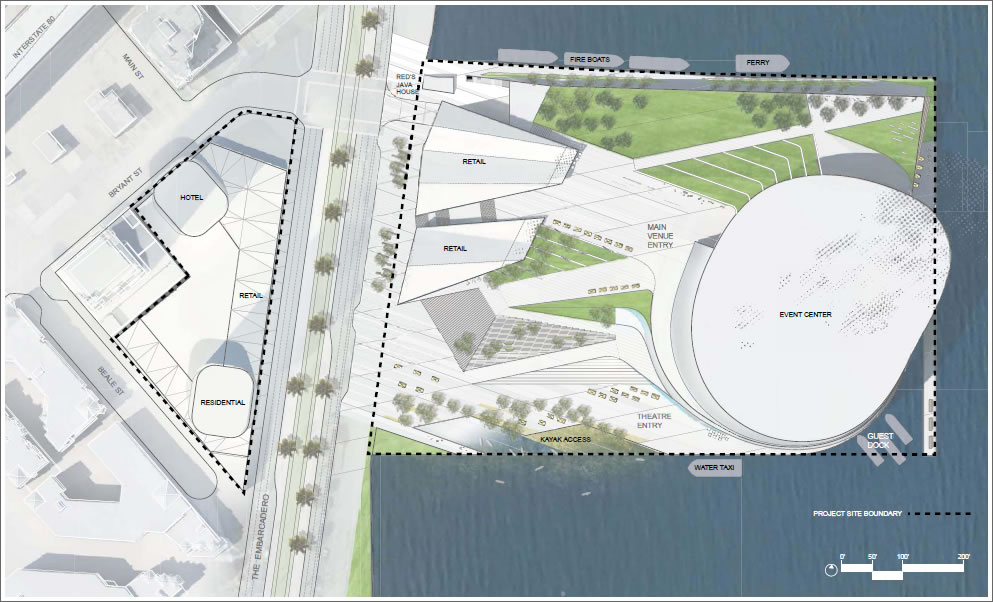 With the financial framework for the proposed Warriors Arena on Piers 30-32 having been approved by San Francisco’s Board of Supervisors, San Francisco’s Planning Department is quickly moving forward with the Environmental Impact Report (EIR) necessary for the billion dollar arena and proposed mix-use project on Seawall Lot 330 to rise.

Scheduled to be ready for review by summer 2013, a plugged-in tipster delivers the hot off the presses notice of preparation and public scoping meeting for the EIR which has been scheduled for January 15. From the notice which mentions a couple of interesting project variants to be explored and omits one big variant which some were hoping to see:

The EIR will discuss the proposed project’s potential conflicts relating to physical environmental effects with the San Francisco General Plan and its relevant elements, particularly the Eastern Neighborhoods Area Plan. The EIR will also analyze the project’s potential conflicts with the Bay Conservation and Development Commission’s (BDCD’s) San Francisco Waterfront Special Area Plan and the Port of San Francisco’s Waterfront Land Use Plan. Other applicable planning documents will be discussed for context, including, the Bicycle Plan, Sustainability Plan, Climate Action Plan, and Better Streets Plan, as well as the City’s Transit First policy.

The EIR will also discuss the conformance of the proposed project with the San Francisco Planning Code, including the specific sections relevant to the area, including but not limited to, Sections 829 (South Beach Downtown Residential Mixed Use District), 260 (Height Limits), and 240 Waterfront Special Use District. Inconsistencies with relevant plans or zoning that could result in physical effects on the environment will be analyzed in the applicable environmental topic sections, such as noise and air quality.

Fresh & Easy Is Having A Hard Time, Likely To Exit The SF Market(s)