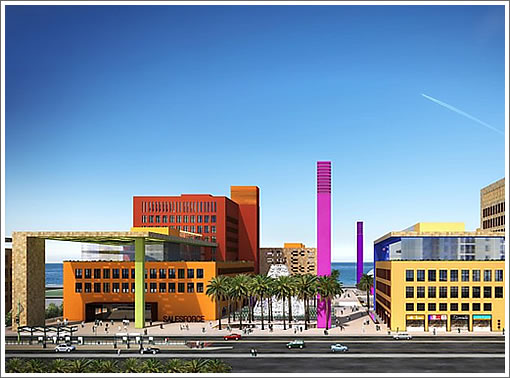 A few days before Salesforce.com was poised to receive the City’s approval, Salesfoce pulled the plug on their plans for a 14-acre campus in San Francisco’s Mission Bay.
From Reuters on Friday:

The company’s stated reason for changing course was that the new campus would not be big enough for its growing workforce. But people closely involved with the ill-fated development paint a picture of an out-of-control project that lurched forward even in the face of stratospheric costs and tepid support among employees. Only a construction expert hired late in the planning process convinced Benioff that moving forward would be folly.

The canceled development has already cost Salesforce tens of millions of dollars, and the price tag could rise further if the Web-based software maker fails to find a ready buyer for the land it bought, according to recent regulatory filings.

The cancellation has also singed the company’s relationships with city officials, including San Francisco Mayor Ed Lee, who had touted the development as an economic boon and was stunned when it was suddenly abandoned.