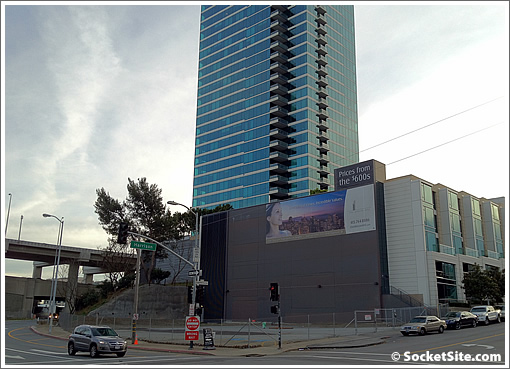 As we first reported in January, the One Rincon Hill second tower site was in play, but Miami based Crescent Heights wasn’t the buyer. Instead, Principal Global Investors picked it up for $29.75 million out of foreclosure (which plugged-in people knew to expect).
According to the Business Times, “the development team is aiming to start construction by this summer, and…the units will likely be rented out rather than sold as condos.”
Or as a reader suspected a few months ago, “this tower will be built as apartments, with a condo map put on it so that it can be converted at some point in the future.”
∙ One Rincon Hill Tower Two Site In Play [SocketSite]
∙ One Rincon Hill Phase II Partnership Interests Headed For Foreclosure [SocketSite]
∙ New tower to rise on San Francisco’s Rincon Hill [San Francisco Business Times]