35 Lloyd Redux: It’s Getting Hot Out There In Here… 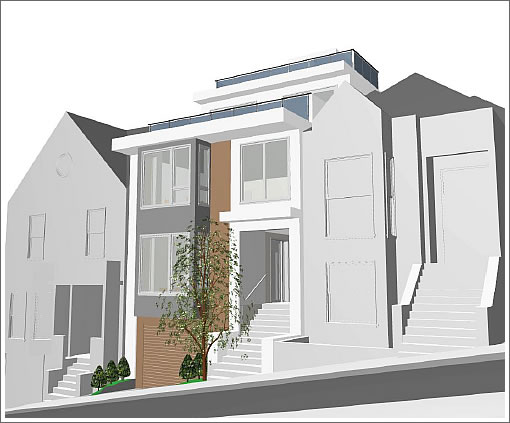 Having been continued from the meeting on September 16, the proposed four-story development at 35 Lloyd is back in front of San Francisco’s Planning Commission this Thursday.

Once again, the Planning Department recommends approval of the plans for the undeveloped lot, the neighbors oppose, and the majority of supporters all work for Vanguard Properties (although none self-identified as such).

A bit of background from a plugged-in reader:

The lot has always been the garden for 45 Lloyd. The original owner, Max Wisenhutter, split the lot around 1900 (according to Sanborn Maps). He kept one lot and gave the other to his daughter. The daughter sold both lots in the 60s to Herb Donaldson.

Herb passed away in December 2008, and his estate sold the house and garden separately to cover estate taxes. They took the first offer they got, which is why it went so cheap. Most neighbors didn’t even know the garden was a separate lot until it sold.

UPDATE: Added as an addendum to the Planning Commission packet for 35 Lloyd, the project sponsors have noted that of the 18 letters of opposition received for the project, the authors of 12 letters live in houses as tall as the proposed project. Images of said houses were included for good measure.

The project sponsors also cite “inaccuracies and inconsistencies” in the opponents renderings of the proposed project.

One Less Listing (But Without A Reported Sale)

A Lost Decade Listing For 165 Hazelwood Over In Westwood Park