Do We Have A Winner? 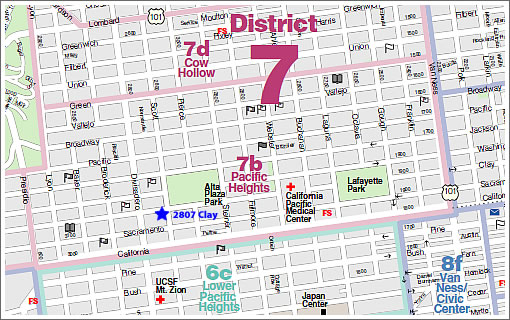 To be honest, we probably wouldn’t have taken the friendly wager. Or more accurately, we wouldn’t have taken a wager that defined the southern boundary of Pacific Heights as north of Clay (it’s technically north of California, both old and new).
But the dollars to doughnuts wager between a couple of readers on the basis of whether or not we’d see a single-family home sale in Western Pacific Heights (“defined as north of Clay, south of Green, west of Fillmore, east of Presidio”) close for under $1,300,000 before the end of 2010 was accepted.
And on July 9, 2010 the sale of the single-family home at 2807 Clay closed escrow with a reported contract price of $1,275,000. Granted, the listing noted “Kitchen and bath are very dated, and all systems need major work,” but fixers weren’t specifically excluded from the wager as long as they were habitable, only “no fires or acts of God” and “delivered vacant free of tenants” (the listing also notes possession at close of escrow).
The only potential sticking point, 2807 Clay is on the south side of the street. That being said, in the language of the party defining the boundaries, “I deliberately left out the area south below Clay because there are a few very small Victorian places, from when PacHts was still the Western Addition” which would suggest both sides of Clay were included, but that 2807 Clay was exactly the kind of property said party was trying to exclude.
∙ The Income Might Look Interesting But Don’t Neglect The Principal(s) [SocketSite]
∙ San Francisco Real Estate Districts: Maps And Neighborhoods [SocketSite]
∙ San Francisco Association Of Realtors New Neighborhood Map [SocketSite]
∙ Apples To Apples (If You Ignore The New Bath): 2203 Broderick [SocketSite]