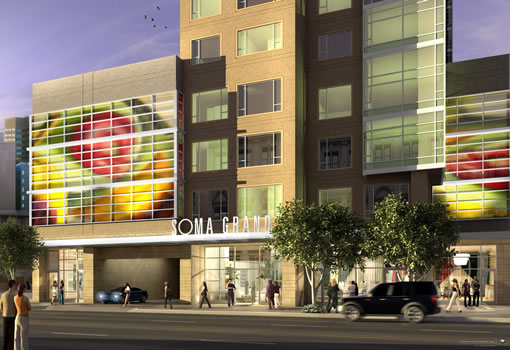 The Soma Grand christened their sales office at 1085 Mission with a packed Friends and Family event last night. We were lucky enough to score an invitation. And smart bold enough to ferret out the straight scoop:
∙ While March 7th marks the VIP grand opening, the first official release (and actual taking of deposits) isn’t expected to kickoff until mid-April. (And a blowout “Rincon style” launch party is tentatively planned for May 2nd.)
∙ The first year of twice-monthly housekeeping service is included in the purchase price, but a la carte thereafter. Yoga, car service, and massage (in the “private studio [or] meditation garden”) are a la carte from the get go. Monthly HOA fees are expected to run under $600/month.
∙ And while an official price list still hasn’t been released, an insider assures us they’re shooting for an average of $600-$800 a square foot (depending upon unit size/floor).
And of course, the extra special SocketSite scoop for our “plugged in” people: rumor has it the developers are in discussions with Charles Phan (of Slanted Door fame) to develop a new dining concept for the larger of their two ground floor retail spaces.
UPDATE: We’re blaming one too many “Soma Gs” for the fact that we failed to get the scoop on parking. We do know there is room for 504 cars in the Soma Grand garage, but we honestly don’t know how the spaces are being allocated or priced (yet).
UPDATE (3/5): According to the developer, “everyone with a unit should be able to park a car, whether its deeded, assigned, or valet is still in the works.” As always, details when we have them.
∙ It’s All About Service And Style At The Soma Grand (1160 Mission) [SocketSite]
∙ The Soma Grand: Topped Off And VIP Opening March 7 [SocketSite]
∙ The Slanted Door: Biographies [slanteddoor.com]

Rem Koolhaas Spoke In San Francisco (And We Missed It)