Modern Mansion Will Rise but Penthouse Could Get Cut 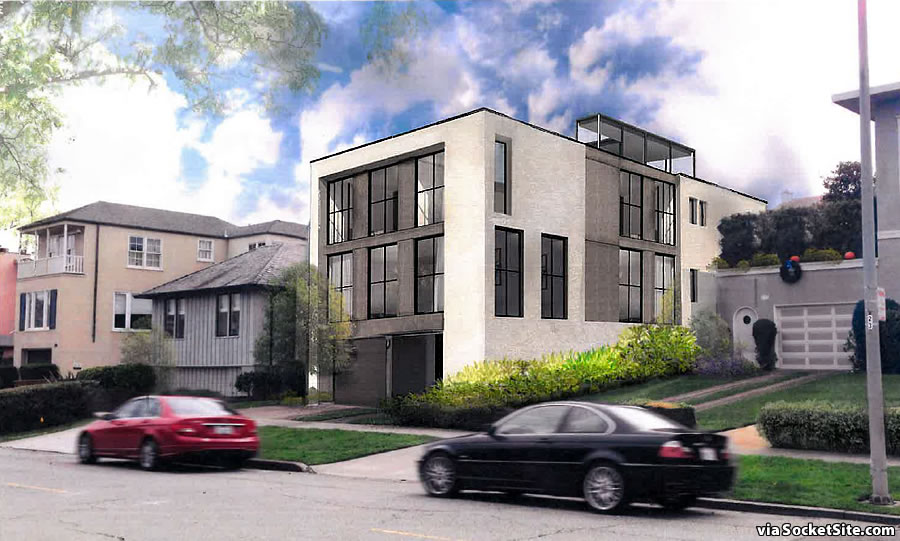 San Francisco’s Board of Appeals has upheld the approval of a permit to start demolishing the existing 3,835-square-foot home at 255 Sea Cliff Avenue in order to make way for a modern mansion to rise. But the fate of the mansion’s previously approved design remains in flux.

While a glass-walled penthouse level was approved by San Francisco’s Planning Commission following a reduction in its size to 347 square feet, as rendered above, the building permits for the mansion were appealed by neighbors who argued that an inclusion of the penthouse would be inconsistent with the existing scale and character of Sea Cliff while citing concerns with respect to the loss of light, air and privacy for the surrounding homes, and potential light pollution from the so-called “Apple store on the roof,” as well.

On Wednesday evening, a motion by the Board to effectively grant the neighbors’ appeal and uphold the mansion’s building permit on the condition that the penthouse and roof deck be removed from the plans, based on being out of context with the surrounding neighborhood, failed to pass by a vote of 2-3 with President Honda, Commissioner Lazarus and Commissioner Wilson dissenting.

But the Board then unanimously voted to continue the appeal of the building permit a week, in order “to allow time for the permit holder to work with the appellants on a design that removes the penthouse and includes a roof deck no larger than 500 square feet.”

As the approved home and penthouse level would look from one of the aforementioned appellant’s home on El Camino Del Mar:

And as the appellant’s view and 255 Sea Cliff Avenue currently appear: